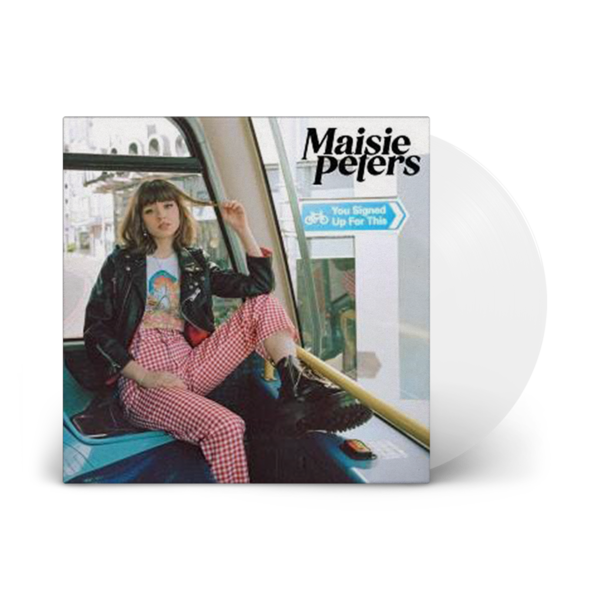 You Signed Up For This: Limited Edition White Vinyl LP

Maisie Peters treated fans to their first taste of ‘You Signed Up For This’ earlier this year with ‘John Hughes Movie’. The track soared to No. 1 on iTunes the weekend of release, was playlisted across BBC Radio 1 and 2, and has been streamed over 11.5 million times globally to date.

Impressively, ‘You Signed Up For This’ is Maisie’s second full length release in the space of three months, as she recently became one of the youngest musicians in history to write and curate a soundtrack for the second season of Apple TV+ Original Series, ‘Trying’, at only 20 years old. Written in just two months last winter, the stunning body of work includes duets with her friends and favourites, including Griff, James Bay and Bear’s Den.

With her knack for transforming everyday experiences in to vividly written diary-style songs, ‘You Signed Up For This’ is both Maisie’s coming of age story and a love letter to girlhood; penned with the wit, charm and quiet confidence that has seen her ascend from busking on the streets of Brighton, to recently making her US TV debut on The Late Late Show with James Corden. Transporting us directly in to her world as she navigates from small town teenager to adulthood, there’s a universal sense of familiarity and nostalgia as she shares memories of blossoming relationships (‘Outdoor Pool’, ‘My Elvis Song’), being played (‘Boys’, ‘Volcano’), heartbreak (‘Tough Act’, ‘Villain’), and first holidays with her twin sister (‘Brooklyn’).