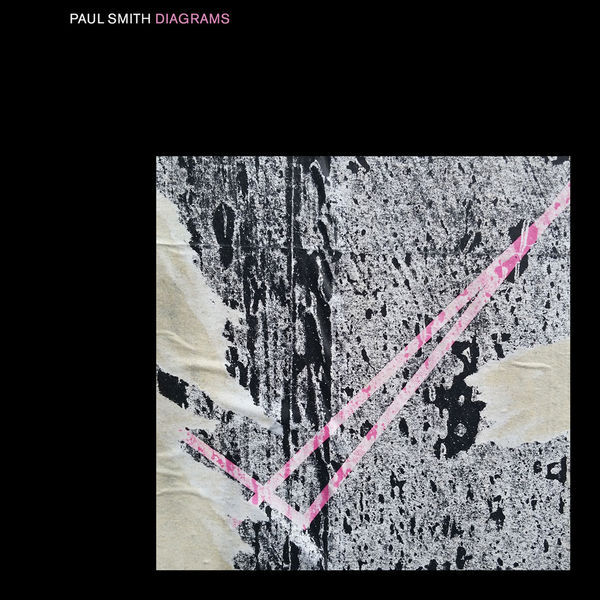 Paul Smith returns this October with a brand-new album Diagrams, a release that strips bare his work to this point and ploughs fresh songwriting pathways. Now onto his fourth record as a solo artist, the Maxïmo Park frontman continues to sharpen his skills via a keenness to step out of his comfort-zone, and an ever-present desire to digest culture in all its forms. Most recently he found himself performing alongside folk star Rachel Unthank for Lauren Laverne’s Great Northern Soundtrack, and he is currently a host for publisher Penguin’s podcast alongside David Baddiel and Konnie Huq, discussing the latest book releases.

With each Paul Smith release we expect an evolvement, and on Diagrams he remains committed towards expanding the parameters of his songwriting. From the anthemia of his debut solo outing Margins (2010) to the exploratory minimalistic jazz of his Peter Brewis (Field Music) collaborative album Frozen By Sight (2014) and the spirited, guitar pop record that was Contradictions (2015), Diagrams sets its stall out as a vivid and complex album that binds the obscure and the everyday, searching for romance under stones that not many songwriters would think to turn over.

As a body of work, it seeks to unite the strengths that Smith has in his canon, drawing on his ability to both write from experience, yet also conjure new stories of unknown protagonists. Sidestepping (but not wholly ignoring) the more autobiographical work that played out through previous releases, Diagrams instead sees Smith further explore his nous for telling these short stories. Alongside co-producer Andrew Hodson, of 6 Music favourites, Warm Digits, he charts a course into the yearning, melancholic jangle-pop of The Go-Betweens, finding himself drawn to the literate, grunge-pop of The Lemonheads, to build a cohesive collection that pulls in his many strengths

“I try to absorb information and filter parts that interest me into the songs, while retaining my own, singular voice. I still believe in the power of a pop song to alter someone’s day, and although this record was mostly made in a bedroom, I felt the songs would have a universal appeal.” – Paul Smith

With his ability to unravel the day-to-day and transform the commonplace into an eloquent turn of phrase, the thread that holds Diagrams in place is Smith’s honesty and empathy. It’s these matters-of-the-heart elements that push and pull at the listener’s emotions. Resultingly, it’s a collection that feels incredibly relatable.

Album opener The Public Eye sets the tone with a dark undercurrent and was written in the aftermath of the “Hostile Environment” policy adopted by the British Home Office. Taking aim at our climate of suspicion, it shines a light on how vulnerable groups are attacked without factual foundation (“Convictions without proof”). Around And Around similarly details the futile merry-go-round of the news cycle, before Silver Rabbit conjures a story of self-doubt, set against the low-budget romance of the seaside, and channelled through overdriven guitars. Lake Burley Griffin - inspired by the story of Walter Burley Griffin, an American who designed Canberra alongside his wife Marion Mahony Griffin – is the album’s discordant left-hand turn, taking in the post-rock influence of Slint or Tortoise. A love story featuring prominent clarinet, it showcases – along with the saxophone in The Public Eye – Smith’s addition of woodwind instruments to his musical palette. Elsewhere on John he imagines a life that can never be known, inspired by a name scrawled on the back of a toilet door, extrapolating the sentiment and following it into a world where the story unfolds from schooldays to falling in love. It’s in these instances that Smith’s talent is subtly exemplified. He envisages unknowable situations and turns them on their head to evoke truly universal emotions of hope and regret (“what if the first chance, is the last chance?”).

Through The Beauty Contest and Critical Mass – the former featuring folk royalty, Marry Waterson, the latter inspired by JG Ballard and Cormac McCarthy's 'The Road' - Smith again shows us he can veer into and out of songs inspired by reality. The Beauty Contest plots a late-night train journey, and Critical Mass plumbs bleak and apocalyptic depths, albeit alongside a black sense of humour.

Diagrams is a collection that further cements Smith’s reputation as a revered songwriter and lyricist, whose skills continue to find new avenues through which to develop.