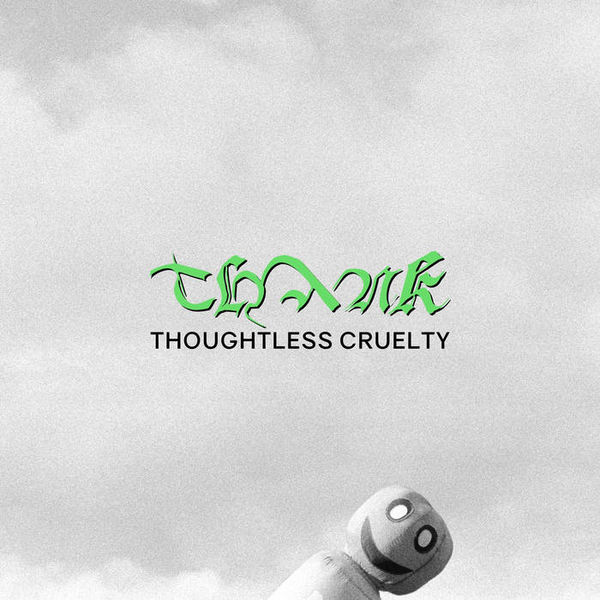 Box Records is pleased to welcome the debut album from Leeds noise rock band THANK. 'Thoughtless Cruelty' is a stark observation of human cruelty filtered through the band’s grim fascinations including long term nuclear warnings, CNN’s Turner Doomsday Video (opening song 'From Heaven' is a partial reworking of the Latin verse from 'Nearer My God To Thee', the hymn performed in that video), the writings of Saint Ignatius of Loyola, and the "business as usual" liberal politics which has given way to the global rise of the far right. Unlike THANK’s previous material, which was largely honed at gigs and then recorded almost entirely live, the pandemic found the band in unchartered territory as they hit the studio having not been in the same building for months, including most of the album’s writing period. Says vocalist Freddy Vinehill-Cliffe on the recording of the album - "It was a very different way of working for us; most of the songs did not have an arrangement figured out, we added layers to serve each track without worrying about how it would translate in a live setting. I guess that's the norm for a lot of bands, but it was a very novel experience for us." The result is an undeniably fascinating and enthralling album which sees the band incorporating more melody than on previous releases (on EXAG' Records, Hominid Sounds, Buzzhowl Records). Clear influences can be heard throughout; Xiu Xiu in the looped 808s of 'Plausible Deniability' and the chaotic xylophones of 'Paris Syndrome', The Body in the layers of dense distortion throughout, and These New Puritans in the blunt syncopation of 'From Heaven', as well as less obvious reference points like Drunk In Hell, Tears For Fears and Marie Davidson.