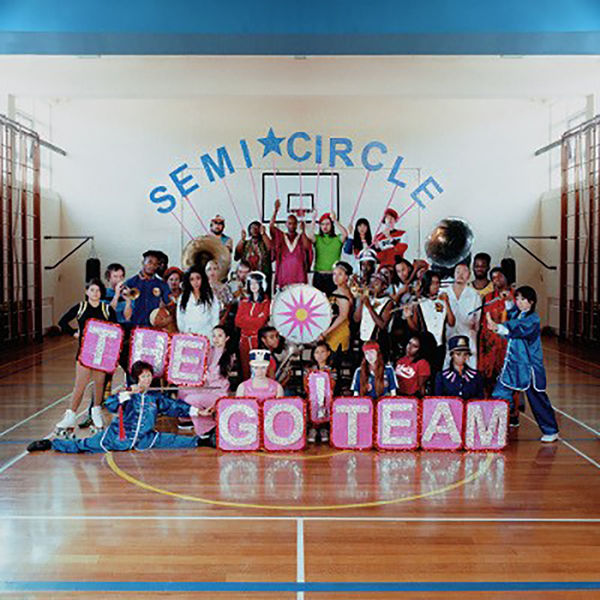 The perfect adrenaline shot when you want some sugary pep – something desperately needed in January. The Go! Team’s ‘Semicircle’ is a New Orleans horns and hip hop mardi gras party as lead by the funkiest cheerleader – an absolute joy!

The Go! Team have always been cheerleaders for a better world – an outpouring of collective joy in the face of small-mindedness and dismal careerism. They rejoice in the unifying urges and the chance encounters between cultures that lead to something new. They’re a band who still have faith in the power of music to make things better. Now more than ever, we need The Go! Team.

The brainchild of Ian Brighton-based melody obsessive Ian Parton, The Go! Team’s fifth album SEMICIRCLE began with an idea; In his head was the image of a school marching band gone rogue, chucking away their sheet music to blast out Northern soul stompers or Japanese indie-pop swooners or old-school hip-hop jams. “I like the swing and the toughness of marching bands, the physicality of feeling a beater walloping a bass drum,” explains Ian, “but I wanted to reclaim them from patriotic or sporty associations. That was the kick-off for this record.”

With the vital input of current live players Simone Odaranile (drums) and Angela ‘Maki’ Won-Yin Mak (vocals), plus original Team members Sam Dook (guitar) and Ninja (irrepressible rapping), not to mention Annelotte de Graaf AKA Amber Arcades, and Julie Margat AKA Lispector, topped off by an inspiring trip to Detroit where he hooked up with The Detroit Youth Choir, SEMICIRCLE took shape across the first half of 2017.

Stacking up sousaphones, glockenspiels and steel drums, breakbeats and SEMICIRCLE is a kaleidoscopic cacophony, almost as if the sound itself is bent and refracted in the metallic curves of a trumpet, comforting and intoxicating at the same time. One moment we hear the kids from Detroit channelling Rescue Me’ and ‘SOS’ on ‘Mayday’, a morse-code-inspired soul belter about a love emergency, then there’s Ninja unleashing a volley of verbal stingers on ‘She Got Guns’ or the lo-fi R&B vocal for ‘Chain Link Fence’; SEMICIRCLE brings together unlikely elements to create a euphoric, exhilarating experience.

Ian is keen to emphasise that the vibrant utopia he and his cohorts have conjured up on their fifth album is not an escapist fantasy but a potentially achievable goal. “It’s about reminding yourself of the good things in life,” says Ian. “We don’t want to be dumbly optimistic and say, ‘Hey, isn’t everything great!’ but there’s something to be said for just getting on with it, for getting organised and not letting the fuckers get you down. Party for your right to fight!”

As always, it’s good to know The Go! Team are on your side.