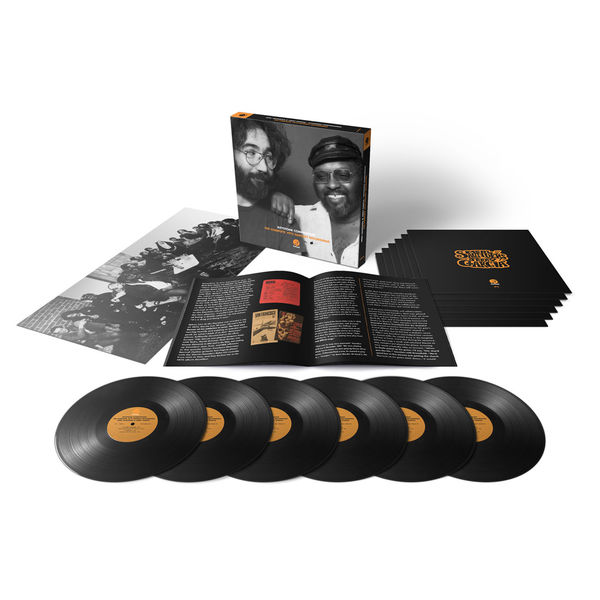 We’re pleased to announce the vinyl edition of the acclaimed MERL SAUNDERS/JERRY GARCIA Keystone Companions: The Complete 1973 Fantasy Recordings, out November 25th. Recorded live on July 10th and 11th, 1973 at the Keystone club in Berkeley, California, the 24 tracks on this 180-gram, 6-LP collection beautifully capture the magical musical friendship of keyboardist Merl Saunders and Grateful Dead guitarist Jerry Garcia. An accompanying booklet includes never-before-seen photos new to this edition, plus updated liner notes by Grateful Dead expert David Gans. A collectible poster will round out the package.

The five-year association of San Francisco-born keyboardist Merl Saunders and guitarist-vocalist Jerry Garcia was fruitful for both musicians, as well as for fans who witnessed their now-legendary performances at clubs in the Bay Area. It made the venerable jazz organist and pianist an icon in the world of rock, and it opened up new avenues of improvisation for the innovative rock guitar player. Saunders had been writing and performing in New York before returning to the West Coast, where he began doing session work with Garcia, already at the helm of one of the world’s most popular rock bands, the Grateful Dead. By December 1970, a weekly jam session featuring Saunders, Garcia, bassist John Kahn, and drummer Bill Vitt had become a weekly gig at San Francisco’s Matrix.

Originally released as Live at Keystone in 1973, the double LP was recorded by Grateful Dead associates Betty Cantor-Jackson and Rex Jackson, with all four artists credited as producers. Additional material was released as Live at Keystone, Volumes 1 & 2 in 1988. Keystone Companions: The Complete 1973 Fantasy Recordings assembles the original recordings--remastered--and presented in chronological order – allowing fans to experience the two shows exactly as they were performed. The repertoire spans blues, rockabilly, jazz, funk, Broadway, Motown, two Bob Dylan songs, and Jimmy Cliff’s immortal “The Harder They Come.” Some songs appear twice, providing the opportunity to hear how the band kept it loose and fresh. As Gans writes in his liner notes, “This music is as exciting and satisfying 40 years later as it was on the day it was made.”

The 2012 compact disc edition of Keystone Companions: The Complete 1973 Fantasy Recordings was embraced by both fans and critics alike. Rolling Stone gave the collection four out of five stars, proclaiming, “What's most remarkable about this [set] is the range…There are no rules–just four luminaries testing their own boundaries.” Relix called the box “compelling,” adding that, “The spacious, remastered sound brings out the chemistry of the two main players as well as the interplay of the rhythm section.”