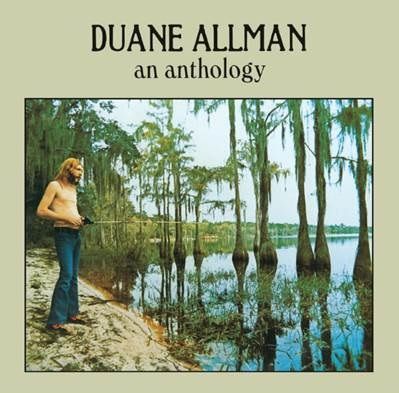 Few artists have had as large an impact on popular music in such a short period of time as legendary guitarist Duane Allman. In just four years, Allman laid down session tracks for some of music’s most important stars, founded one of rock ‘n’ roll’s most influential collectives and redefined the lead guitar, spawning multiple generations of guitar heroes who continue to rediscover his genius 45 years after his tragic death at age 24.

Allman’s impact on rock is incalculable, influencing players and exciting fans through non-stop exposure on radio, in popular culture and through the sounds of the legion of players who’ve mimicked him over the years. An Anthology captures Allman in the many guises he somehow developed in just four years – from his time as a session musician at the iconic FAME Studios in Muscle Shoals to his fraternization with fellow legend Eric Clapton and his fiery, virtuoso work with The Allman Brothers Band.

The double LP opens with a 20-year old Allman showcasing his blues player skills with a devilish slide hand and epic sense of grandeur on the track “B.B. King Medley” recorded with his bandmates Hour Glass in 1968. Allman caught the attention of Rick Hall, visionary producer at Muscle Shoals, and decided to put him on Wilson Pickett’s version of the Beatles’ “Hey Jude” which led to another huge opportunity for Allman when Atlantic Records’ Jerry Wexler heard his work and bought out his contract. That led to sessions with Aretha Franklin, Boz Scaggs, John Hammond, King Curtis, Bonnie & Delaney & Friends and Clarence Carter, all of whom make an appearance on An Anthology.

Around the same time Allman founded The Allman Brothers Band and moved the group to Macon, where they began to redefine rock ‘n’ roll with a blend of fire and ice - high energy solo runs provided by Duane and laid-back cool provided by his brother Gregg - that still reverberates in pop music today as country music artists and fans rediscover and reinterpret 1970s Southern rock. The closing side of the second platter includes benchmark Allman Brothers recordings such as the sound-defining “Statesboro Blues,” the lowdown boogie “Stand Back” and the spacy, jazz-influenced “Dreams” and “Little Martha.”

The collection also includes his work with Clapton on the Layla and Other Assorted Love Songs sessions, one of music history’s most memorable super-power team-ups. The recordings here, laid down in Miami where Clapton met and befriended the guitarist in 1970, include Derek & The Dominos’ “Layla” and the Clapton recording “Mean Old World,” a jovial acoustic back and forth between the two guitar masters.

An Anthology paints a vivid portrait – for legacy fans and new acolytes alike - of a musician who like Hendrix and Cobain changed so much about the music we love in a creative explosion that lasted just a few years, but continues to resonate decades later.