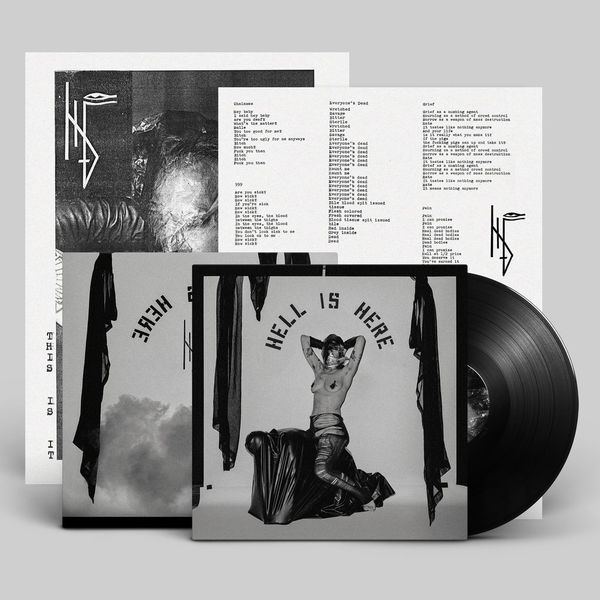 "2018’s “Castration Anxiety”, the debut full-length from Chicago’s HIDE, presented an adept evolution in the journey of interdisciplinary artists Heather Gabel and Seth Sher. Trading in concrete and traditional songwriting and compositional structure for more challenging, stripped back, and cathartic arrangement, the duo ventured to reconfigure industrial music for a contemporary age.

“Hell Is Here”, HIDE’s 2019 sophomore full-length, sees this evolution progress even further. Using their previously established blueprint, Gabel and Sher poke and prod at the perception of musical context, and remind the listener that feelings of anxiety, pain, and discomfort are equally as important as those of resolution. Perhaps the strongest tool utilized here is the material’s dichotomy between the abrasive and the sterile. Beneath the crushing noisy exterior, sparks the familiar human voice. Divorced from their caustic counterparts Gabel’s vocals play a decisive role in cementing narrative for the material’s uncompromising assault on the senses. Opening track “Chainsaw” immediately lays the groundwork for the excursion to come. Twisted, cold, and dry repetition soundtracks a one sided catcalling verbal assault. The theme of objectification carries through to the following track “999” with the use of a well-placed vocal sample that declares “...when you depersonalize another person... it seems to make it easier to do things you shouldn’t do.” This sentiment is expertly echoed throughout the rest of “Hell Is Here” and attempts to forcefully remind the listener of humanity’s absurd and animalistic nature. Nearing the end of the punishing trek we find “Pain”, which is arguably the record’s most formidable use of space. The call and response nature of both the harsh percussive elements paired with the impending vocals effectively induces a deafening anxiety that’s rivaled only by the lyrical content of Gabel’s shrieking voice.

The summation of material presented on “Hell Is Here” is perhaps best interpreted as the rawest innards of HIDE’s vision for the self-governing ideology that’s consistently present throughout their body of work. Painful truth and honest examination of life’s darkest, and often undiscussed, crevices scratch and claw their way to the surface through the duo’s strongest and most confrontational work to date.Produced by HIDE and Seth Manchester, recorded by Seth Manchester at Machines With Magnets. Mastered by Adam Stilson at Decade. Cut by Josh Bonati.LP comes packaged in soft-touch laminate jacket with photography by Evan P Jenkins and designed by HIDE, with foldout lyrics and 18x24” poster inside. CD is packaged in reverse board wallet with lyrics.