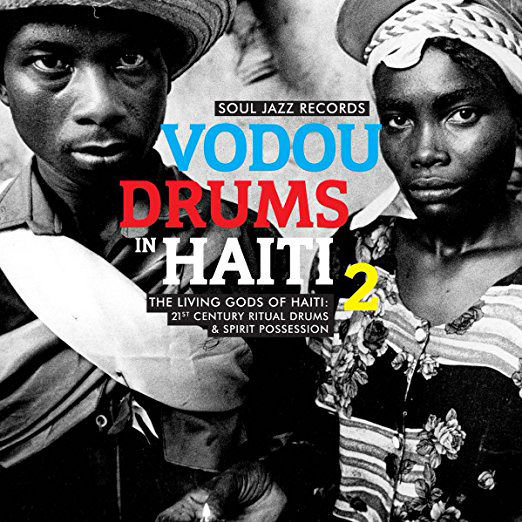 Vodou Drums In Haiti 2: The Living Gods Of Haiti

Soul Jazz Records first journeyed to Haiti in 1996 to record a series of three albums about Haitian Vodou music and culture. One of these, ‘Voodoo Drums’, featuring the drum rhythms used to bring about spirit possession, struck a striking chord with listeners and amazingly went on to become one of their best-selling albums. “I haven’t heard anything quite like this; the rhythms are very deeply orchestrated yet it also sounds like improvisation. There are tonalities and textures coming from this album like I’ve never heard. A great album by Soul Jazz, very well recorded. Some of the sounds I have no idea how they are getting them! This album is bending my ear and setting off the dancing devils in my soul!! Unreal!” - The Guardian

In 2016 Soul Jazz Records returned to Haiti once more to record a new second volume of the same intense Vodou drumming. Recorded in the capital of Port-au-Prince, Haiti, some 20 years after their first visit, this album also features the very same musicians, the Drummers of the Société Absolument Guinin.

“This record, which consists entirely of recordings of vodou drumming made in Port-Au-Prince, is one of a series of Soul Jazz releases exploring Haitian music, all of which are worth your attention. Nonetheless there’s something about the intensity and virtuosity of this particular drums-based album that’s particularly transportive. It captures the extraordinary complexity and sophistication of these ceremonial rhythms, which shift, interlock and switch angle of attack with a logic that’s near-indecipherable as a listener unable to see visually how they unfold. These drum rituals are central to Haitian vodou, their power to awe and mesmerise isn’t dimmed through being relatively unfamiliar with the traditions that underlie them; these recordings are dynamic and riveting in their intricacy and power.” - The Quietus

Like the first album, these new recordings somehow manage to walk the line between serious ethnological authenticity and a connection with the energy and intensity of the dance rhythms of techno and house music that make them quite unique.