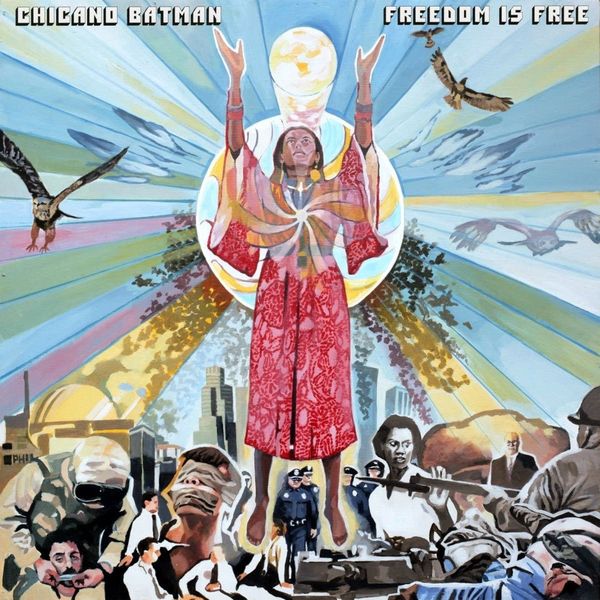 They came out of LA, four young men in vintage formalwear, playing songs that blended Brazilian Tropicalía with early 1970s psychedelic soul and the romantic pop of bands like Los Ángeles Negros. It was an immediately addictive sonic brew and their reputation grew fast.

Since forming in 2008, Chicano Batman have released two full-length albums - a self-titled 2009 debut and 2014’s ‘Cycles Of Existential Rhyme’ - and two EPs. The band have played Coachella and toured with Alabama Shakes and Jack White among others. Now they’re making their boldest statement yet with ‘Freedom Is Free’, their third album and ATO Records debut.

Chicano Batman’s look has done as much to set them apart as their sound or their name. Since the beginning they’ve performed in matching suits and ruffled shirts. The band’s Bardo Martinez explains, “We’re making a particular reference that some people understand - Los Ángeles Negros, Los Pasteles Verdes. In the ’70s, it was a big thing where all these cats were playing romantic ballads, but they were funky as hell.”

That sharp funk groove shows up throughout ‘Freedom Is Free’ but especially on the title song. Bardo’s uplifting lyrics, delivered in his uniquely dreamy / romantic style, are bolstered by the backing vocals of New York’s all-female Mariachi Flor de Toloache.

“It’s a counterpoint to the propaganda catch phrase that was invented by the US government during the first Iraq war, ‘Freedom isn’t free,’” explains Bardo. “It’s a counter-narrative… the song itself relates to the idea that freedom is inherent to every individual on this planet and in the universe. I live in Los Angeles, and people are pretty jaded; everybody’s so caught up in their routine they can’t tap into their own spirits. For me, music is about the spirit.”

‘Freedom Is Free’ reflects Chicano Batman’s decision to foreground the soul and R&B elements of their sound. To achieve their ambitious sonic goals, the quartet worked with producer Leon Michels (El Michels Affair, The Arcs) in his Diamond Mine Recording studio in Long Island City, NY. Michels, a veteran of the New York soul revival scene, has performed in Sharon Jones & The Dap Kings, The Black Keys and The Menahan Street Band. In addition to tracking the album to analogue tape, Michels contributed keyboards and his trademark horn arrangements (he’s been sampled by Jay-Z and Ghostface Killah). The partnership between Michels and Chicano Batman truly captures the band’s live energy and brings their aesthetic goals to life.