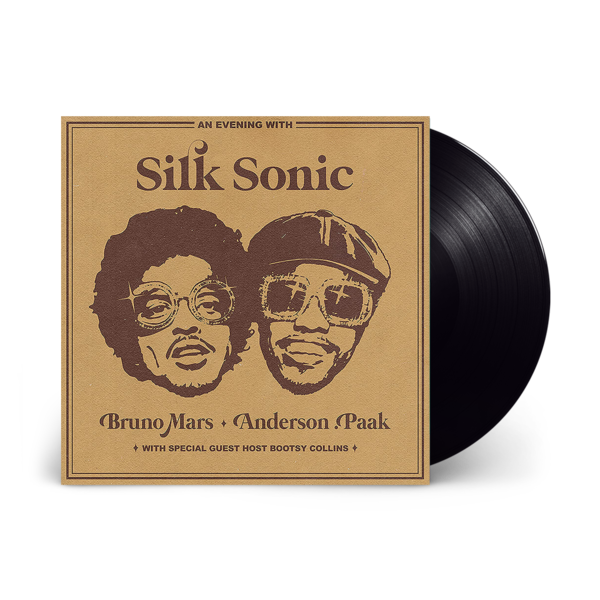 Multiple GRAMMY® Award winners Bruno Mars and Anderson .Paak are releasing their award-winning album An Evening With Silk Sonic on vinyl for the first time on 12th August 2022. The track list includes the hits “Skate”, “Leave The Door Open” and “Smokin Out The Window”. Silk Sonic won International Group of the Year at the 2022 BRIT Awards and are set to open the 2022 GRAMMY Awards. The album entered the UK Album Chart at #9 and remained in the chart for 16 weeks. The focus track on album launch “Smokin Out The Window” peaked at #12 on the UK Singles Chart.

Their debut single “Leave the Door Open,” earned them Best Group at the 2021 BET Awards, entered the UK singles chart at #20 and is now certified Gold in the UK. They released the live version “Leave The Door Open (Live)” and serenaded audiences three times over at the GRAMMY® Awards, iHeartRadio Music Awards, and the BET Awards. The track was followed by a hugely popular social media campaign, #LetSilkSonicThrive and was immediately welcomed by unprecedented critical acclaim. “What’s new, smooth as silk on the ears, and features two stars of R&B?” wrote Billboard, praising Silk Sonic as “a groovy duo” and the single as “lounge at its heart.” Consequence of Sound enthused, “Mars has a voice like a liquid whip, while .Paak raps and sings through a foggy haze. They sound like smoke on the water.”

The seeds of the collaboration were planted in 2017 when Anderson .Paak and Bruno Mars toured together on the European leg of his 24K Magic World Tour. One late-night jam session on the road unlocked immediate chemistry. Just before the world slipped into quarantine, Bruno called Anderson: “Remember that idea we had back in 2017? Let’s do it.” One studio session grew into to a months-long collaboration, culminating the “setlist of doom.” Legendary Bootsy Collins christened Silk Sonic and came in as the “special guest host” for An Evening With Silk Sonic, their debut album.

Silk Sonic was finally set free on March 5th, 2021. Within less than a month, their debut single “Leave The Door Open” cracked over 230 million streams, and currently sits at 2 billion streams with over 510 million official video views. It reeled in rave reviews, including Variety who noted it “could be a Best R&B Song GRAMMY® winner from 1974.” After petitioning the GRAMMY® Awards to #LetSilkSonicThrive, they made their debut performance with “Leave The Door Open” and served up a powerful tribute to Little Richard.