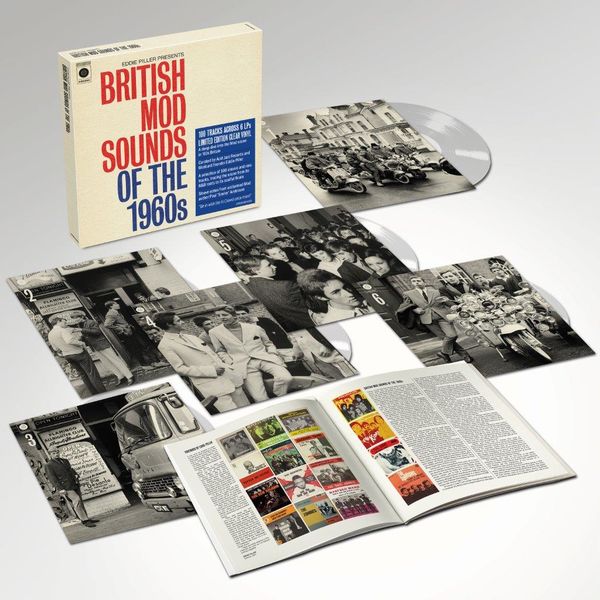 Demon are proud to release “Eddie Piller Presents British Mod Sounds Of the 1960s”, the follow up the “The Mod Revival”. Featuring 100 original tracks across 6LPs, its a deep dive into the Mod scene in ’60s Britain. Including a selection of classic and rare tracks, tracing the scene from its R&B roots to a soulful finale

Curated by Acid Jazz Records and Modcast founder Eddie Piller, and featuring new sleeve notes from respected author and broadcaster Paul ‘Smiler’ Anderson. As Eddie Piller points out in the forward to the extensive sleeve notes that accompany this collection, he chose the word ‘Sounds’ carefully, reflecting the variety of talent contained here, from uncool session musicians without an ounce of style in them, acts who saw an opportunity to jump on the Mod bandwagon and bands who whole heartedly embraced Mod way of life. And so this new collection mixes the Mod mainstays (Small Faces, The High Numbers The Action, The Fleur De Lys), with a generous selection of future superstars (David Bowie, Rod Stewart, Elton John, Marc Bolan, Jeff Beck and Graham Gouldman of 10cc are all represented here), and a few artists so obscure, so rare, that they never got to release a record in the ’60s, but Eddie has tracked down the tapes nonetheless. “Be in with the In Crowd once more.” Every great youth cult deserves a great soundtrack, and when the ’60s Mods adopted classic American R&B, with a side order of hip Jazz, they undoubtedly found the right music for their exuberant and stylish way of life. And yet, buying expensive imports, hoping for a local release or praying for a rare visit from overseas talent was never going to be enough to satisfy British youth with a thirst for the latest sounds. Certainly not those on the dancefloor and definitely not those with their own musical ambitions. It was a music scene that began with imitation, before skill and imagination lead curious minds to innovation, a scene that evolved from average (at best) copies of releases on the Chess, Motown and Stax labels, to become something more sophisticated, something quite unique, something very British. All formats are stylishly packaged (of course) and include new sleeve notes by Paul ‘Smiler’ Anderson, author of the best-selling and highly regarded books ‘Mods: The New Religion’ and ‘Mod Art’.