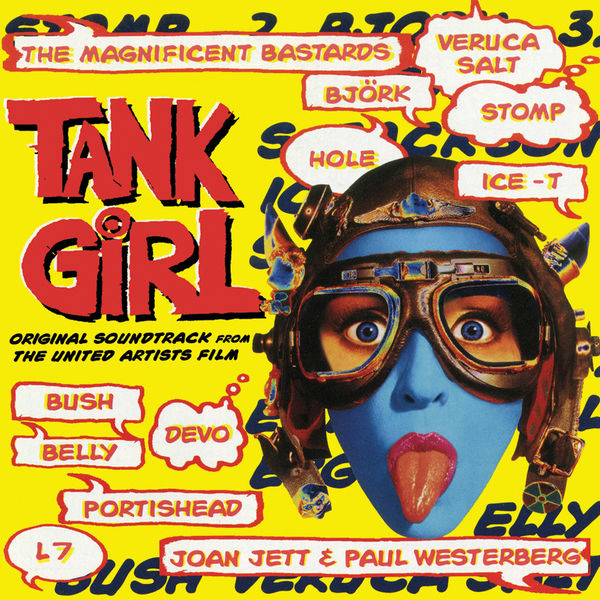 It’s a tough call which is the bigger cult classic, the Tank Girl movie or its accompanying soundtrack, but on balance, we’d have to go for the soundtrack. Yeah, the film had a cast composed of some of the most colorful characters (Iggy Pop, Ann Magnuson) and character actors (Malcolm McDowell, Ice-T, and of course the almighty Lori Petty!) in show biz. And, its dystopic, resource-starved desert setting, intense action sequences, and lead female character mark it as a feminist (albeit funnier) precursor to Mad Max: Fury Road. But check out the soundtrack’s bona-fides: assembled by Courtney Love herself, it features a Who’s Who of ‘90s female rock including Hole, Björk, L7, Veruca Salt, and Belly among others. Plus, it even has tracks that were exclusive to its release, like a unique version of Devo’s “Girl U Want,” “Mockingbird Girl” by The Magnificent Bastards (a side project of the late Scott Weiland of Stone Temple Pilots), and a duet of “Let’s Do It, Let’s Fall in Love” between Joan Jett and The Replacements’ Paul Westerberg. There’s one more thing, though, that elevates this particular release from the mere cultish curio to gotta-have-it collectible: because it came out in 1995, the Tank Girl soundtrack NEVER came out on LP! Yup…this marks the first-ever release of Tank Girl on vinyl, and if there ever was a score that needs to be on wax, this would be it. We’ve done it right, too, with a gatefold jacket featuring the trademark comic book art and stills from the film, and an aqua blue vinyl pressing limited to 1000 copies!