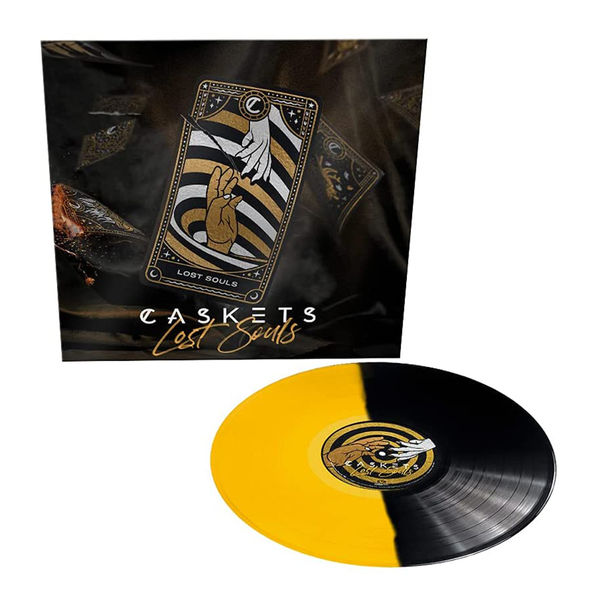 Raised on an unusual blend of Elvis Presley, Simon & Garfunkel, Guns N Roses and Cannibal Corpse, it was Linkin Park’s Chester Bennington that first ignited the spark in Caskets vocalist Matt Flood. “It was his power and range,” he notes of the vocal powerhouse. “It was so impressive, and something I’d never heard before from a male vocalist. It was that which drew me in, it’s what got me into music.” The parallels are clear. Caskets’ sound builds around Matt’s dynamic vocals, honed through a range of previous musical endeavours, and perfectly complimenting the band’s mastery of heavy and soft. But it’s their forward-thinking attitude that better aligns both bands, Matt’s vocal hero paving a new path for melody and metal, and Caskets now set to further reinvent expectations of metalcore and post-hardcore. “I definitely like to surprise people,” Matt notes gearing up for the release of their debut full-length, ‘Lost Souls’, through SharpTone Record; a record largely recorded in bandmate Chris’ garden shed. “Literally, a fucking garden shed,” Matt laughs. “Almost everything was done in the good old shed. There are pictures of it on our Instagram, it’s not that big.” Teaming up with producer Dan Weller, the man behind works by Holding Absence, Dream State, Enter Shikari and Bury Tomorrow among others, Caskets harness this environment to capture a mix of crisp atmospherics and raw emotion; perfectly mirroring its unusual creation. The album retains the immediacy of their acclaimed ‘Ghost Like You’ EP, but sees the band secure its impact in places other than heavy riffs and crushing guitars. The mellower moments, underpinned by strings and pianos, allow space for emotion. “There’s stuff you don’t expect to happen,” Matt adds. “I’m really excited for people to hear it and be like, I didn’t see that coming. That’s what I want.” In stepping forward from ‘Ghost Like You’, Caskets have allowed themselves even more room for their atmospheric sound. “The music was written in mind for screaming,” Matt reveals, “but we decided we didn’t want to go down that avenue. There’s more soaring energy rises and heavy, chunky low-tuned guitars. There are a lot of nice silky verses and atmospheric choruses.” Explorations of loss, fear, volatility and abuse unfold through far reaching melodies set against often thunderous drums and gritty riffs. “We pulled it back a lot on the first EP,” Matt says of the album’s more emotive moments, “but the music has so many different elements to it now, it’s easier to write those sorts of emotions. I want people to take their own personal experience away from every song, but I want that experience to be different for each song too.” To achieve this, Matt isn’t hiding behind lyrical metaphor. “If you’re more upfront about something, especially if it’s something personal to you, it can evoke a stronger feeling. If you’re singing about something deep and dark, you should be using deep and dark words to get that message across.” Matt laughs. “I’m quite a common guy. I’m pretty direct anyway, I’ve always been like that.” Underneath the wide swathe of powerful instrumentation provided by fellow band members Craig and Benji (guitar), Chris (bass), and James (drums) lies Matt’s truth. The common lyrical thread that pulls Caskets’ music together is this unfiltered openness. “It’s my baby,” he notes with genuine sincerity. “I can relate to every song, but not that it’s how it has to translate to the listener. I just want them to know that it’s a personal issue.” He places emphasis on vulnerability above all else. It’s about showing the world it’s OK to be honest about yourself. The music’s message comes to a head on the album’s rousing midpoint, ‘Hopes & Dreams’, a track that began life four years prior as an acoustic number before being given the full band treatment. Dominated by a mesmerising mix of strings and guitars, it injects a moment of hope in Matt’s darker moments. “Hope’s just a ladder and you can make it to the top,” he sings, “just believe in your ability, let your head believe you heart.” It’s a message Caskets plan to deliver proudly both on record and on stage. “I feel like being able to bring up different types of emotion within these songs will make us be able to connect even more with the fans,” Matt looks towards the return of live shows. “We put as much energy and passion into our live shows as we can, because that’s what we would want to see if we were stood there watching us.” This personable energy bleeds into their music, and the eleven tracks that form ‘Lost Souls’. It also pinpoints a significant milestone in both Matt’s musical and personal journey. “Having been a 14-year-old kid learning to play guitar, dreaming of doing what’s actually happening now, and having the ups and down’s I have had, I’m living proof that everyone is capable of doing what they love. The rewards massively outweigh the bad times and the shit that you go through. It’s an incredible feeling, and one that I’m very grateful for.”