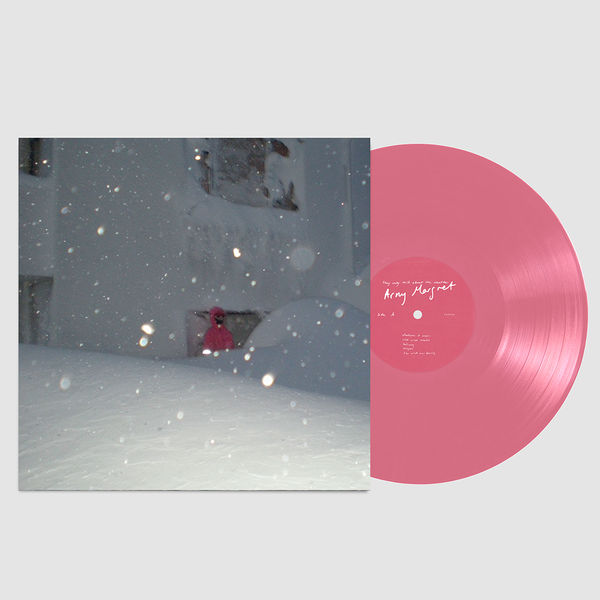 they only talk about the weather: Pink Vinyl LP

Arny Margret has spent the last year making waves, not only in her Icelandic hometown but across Europe and the US, touring extensively, supporting Leif Vollebekk, playing Reykjavik Calling, Iceland Airwaves and more. She released her anticipated debut EP to critical acclaim in February and now she’s proudly announced the release of her debut album, ‘They Only Talk About The Weather’ on One Little Independent Records.

‘They Only Talk About The Weather’ is an album of acute emotional exploration. It’s Arny’s coming-of-age journey, from writing in school, staring out of dorm room windows, being on the road, to today. With poetic proficiency and a knack for composing melodies that bury themselves deep into the subconscious, Arny writes of loneliness and existentialism with stark relatability. There’s a quiet confidence that comes from these tracks; crystal clear in their conception, completely honest, and masterfully arranged. She walks us through her relationships growing up and her realisations about other people as well as herself. We listen as she unpacks herself to a backdrop of vividly painted natural landscapes.

The album’s relationship with weather is noteworthy. Examining her surroundings is how Arny puts to words her feelings. The sparsely populated and confined Westfjord peninsula in north-western Iceland is its own character here, and the bitter but playful snow colours her deeply personal prose across the whole LP. In this sense, ‘They Only Talk About The Weather’ can be a warming comfort to those who need it most as ice forms outside and nights fall earlier in the evening.

She tells us; “I like to use the weather, in one of my songs I even make it a person, I sing “I am blinded by the light of winter, but it comes and goes away, I don't like her very much, you can't depend on anything she'll say”.

Musically she draws inspiration from folk and blues roots, utilising a less-is-more approach to convey openness, choosing to rely mostly on the delicate strumming of acoustics and her dulcet voice. On two tracks, ‘cold aired breeze’ and ‘ties’, Arny plays with a full band for the first time on record, adding layers of shuffling drums, soaring lap steel and synth padding to emphasise impact. Elsewhere on the album minor flourishes reveal themselves constantly, rewarding repeat listens.