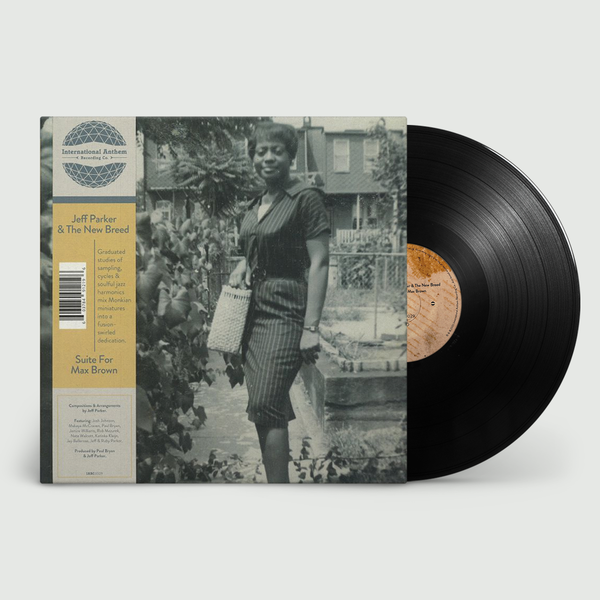 The solo project of post-rock innovators Tortoise's virtuosic guitarist and composer Jeff Parker, boasting the rhythmic flow of hip hop and the soulful swing of jazz.

Original release: 24 January 2020 Format: Limited Edition Vinyl LP + OBI Strip, CD
“I’m always looking for ways to be surprised,” says composer and multi-instrumentalist Jeff Parker as he explains the process, and the thinking, behind his new album, Suite for Max Brown, released via a new partnership between the Chicago–based label International Anthem and Nonesuch Records. “If I sit down at the piano or with my guitar, with staff paper and a pencil, I’m eventually going to fall into writing patterns, into things I already know. So, when I make music, that’s what I’m trying to get away from—the things that I know.” Parker himself is known to many fans as the longtime guitarist for the Chicago–based quintet Tortoise, one of the most critically revered, sonically adventurous groups to emerge from the American indie scene of the early nineties. The band’s often hypnotic, largely instrumental sound eludes easy definition, drawing freely from rock, jazz, electronic, and avant-garde music, and it has garnered a large following over the course of nearly thirty years. Aside from recording and touring with Tortoise, Parker has worked as a side man with many jazz greats, including Nonesuch labelmate Joshua Redman on his 2005 Momentum album; as a studio collaborator with other composer-musicians, including Makaya McCraven, Brian Blade, Meshell N’Degeocello, his longtime friend (and Chicago Underground ensemble co-founder) Rob Mazurek; and as a solo artist. Suite for Max Brown is informally a companion piece to The New Breed, Parker’s 2016 album on International Anthem, which London’s Observer honored as the best jazz album of the year, declaring that “no other musician in the modern era has moved so seamlessly between rock and jazz like Jeff Parker. As guitarist for Chicago post-rock icons Tortoise, he’s taken the group in new and challenging directions that have kept them at the forefront of pop creativity for the last twenty years. As of late, however, Parker has established himself as one of the most formidable solo talents in modern jazz.” Though Parker collaborates with a coterie of musicians under the group name The New Breed, theirs is by no means a conventional “band” relationship. Parker is very much a solo artist on Suite for Max Brown. He constructs a digital bed of beats and samples; lays down tracks of his own on guitar, keyboards, bass, percussion, and occasionally voice; then invites his musician friends to play and improvise over his melodies. But unlike a traditional jazz session, Parker doesn’t assemble a full combo in the studio for a day or two of live takes. His accompanists are often working alone with Parker, reacting to what Parker has provided them, and then Parker uses those individual parts to layer and assemble into his final tracks. The process may be relatively solitary and cerebral, but the results feel like in-the-moment jams—warm-hearted, human, alive. Suite for Max Brown brims with personality, boasting the rhythmic flow of hip hop and the soulful swing of jazz.