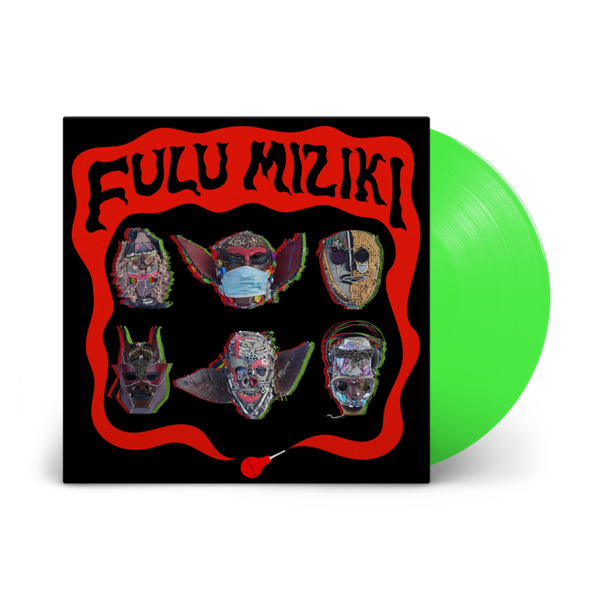 FULU MIZIKI roughly translates as “music from the garbage”, which in a literal sense is an accurate description of the thrillingly chaotic eco-friendly Afro-Futurist collective. The instruments they design, build and play are masterclasses in upcycling.

From guembris built out of computer casing, to jerry-can drum-kits, keyboard inventions from wood, springs and aluminium pipes, and old flip-flops used as pads by plastic tube-wielding percussion players, the Democratic Republic of Congo-formed group’s ethos lies in the respect of nature, the celebration of its gifts and the importance of its preservation through environmentalism.

Their new EP, entitled Ngbaka, finds Fulu Miziki embracing electronica textures and production styles, in a departure from their traditional sound. This shift in style was prompted by the Coronavirus lockdown in Kampala, Uganda (their current base): with rehearsal rooms and public spaces shut, the collective were forced inside and encouraged to conduct sonic experiments. Lead single "OK Seke Bien" is inspired by the church choir singing from the group members' childhoods,.

Fulu Miziki draw from the roots of their native Congolese rumba and soukous, incorporating its driving percussion and tightly rhythmic instrumentation alongside group vocals that move between repetitious chanting refrains and effortlessly interloping harmonies. The hyperactive nature of these dizzyingly psychedelic jams is married with Westward-looking touchstones: American R’n’B and hip-hop, pop music and – increasingly – a diaspora of club culture from both at home and abroad.

The combination forms something of a mutated new strain of dance music: steeped in the heritage of their native Kinshasa but pulsating with the frantic BPM, synthetic processing and manipulated frequencies of modern pop. Lyrically meanwhile, the group are inspired by their environment, with songs centred around climate change – although social issues of police brutality and more conventional love songs find their way in too.

Fulu Miziki’s message is simple and clear: love the earth you live on. It’s environmental activism meant for the dancefloor, love and devotion to Mother Nature fed through a refraction of Congolese rhythms and western pop; but most of all its about humanity, and asking how we’re going to turn around the damage we’ve done to a planet that we’ve for so long taken for granted.