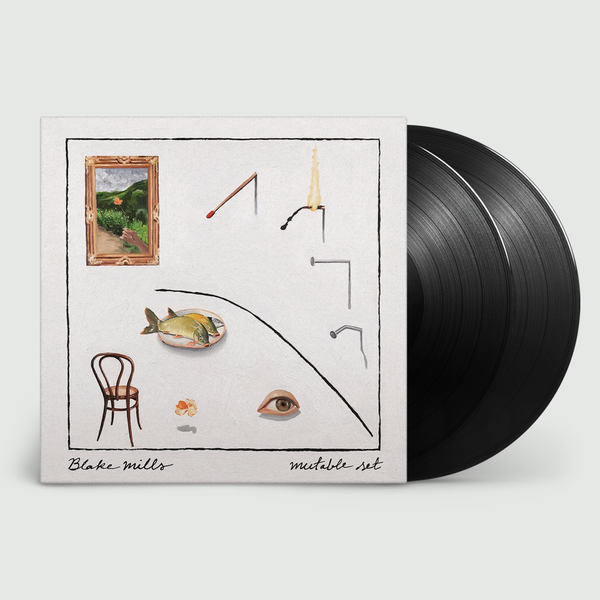 Mutable Set is the fourth studio album from GRAMMY-winning producer, composer, guitarist and songwriter Blake Mills. Crafted as a soundtrack to the emotional dissonance of modern life, the record reflects the push and pull of opposing forces: harmony and eerie dissonance, orchestral crescendos and moments of near silence, melodic yet unresolving chord progressions. The sonically warm album holds Mills’ guitar finger-picking, gentle piano and melancholy tenor at its centre. “This record deals with an awareness of two things—people and experiences in life that are precious, and whatever waits down the moat for something to drop,” says Mills. “I’ve seen the phrase ‘mutable set’ used to describe theater backdrops and set props, things like that. And ‘mute’ might be one of the best musical terms ever invented. So ‘Mutable Set’ is a term that deals with anything that could change or be lost all together.” Lyrically, Mills partnered with his friend, the songwriter Cass McCombs, for parts of Mutable Set. Ranging from narrative to impressionistic, the songs address the multiplicity of modern life. Quiet dissatisfaction segues to bracing optimism and, often, back again. Recorded at the iconic Sound City Studios in Los Angeles, Mutable Set features Mills joined by Aaron Embry on keys (Elliot Smith, Edward Sharpe and the Magnetic Zeros), Sam Gendel on saxophone (Vampire Weekend, Moses Sumney), Rob Moose on strings (Alabama Shakes, Bon Iver) Abe Rounds (Meshell Ndegocello, Andrew Bird) on drums and Pino Palladino (The Who, D’Angelo) on bass. Mills is widely sought after as a producer, co-writer and session musician, collaborating with such diverse artists as Fiona Apple, Alabama Shakes, John Legend, Sara Bareilles, Jay-Z, Laura Marling, Phoebe Bridgers, Randy Newman and Perfume Genius, among others. He was nominated for 'Producer of the Year' at the GRAMMY Awards in both 2015 and 2017, and his producing on Alabama Shakes’ 'Sound & Color' won the 'Best Alternative Music Album' GRAMMY Award in 2015.