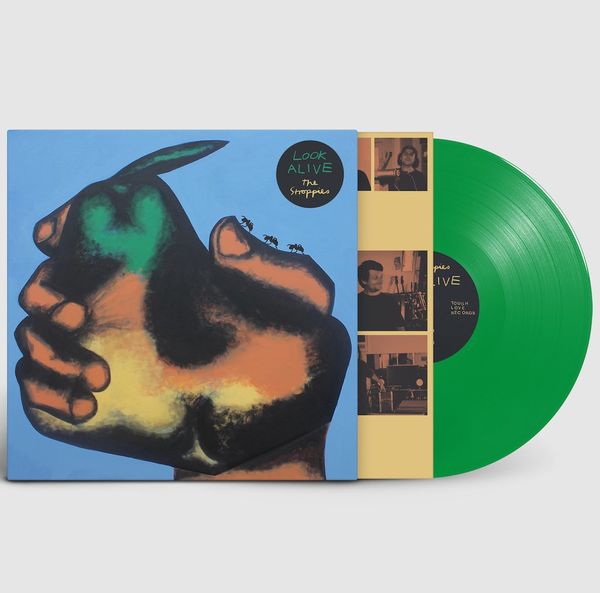 RIYL: Guided by Voices, Pavement, Terry, The Chills, The Clean, The Verlaines. Originally starting as the DIY home recording project of Angus Lord and Claudia Serfaty, The Stroppies have now evolved into what some might call a “proper band”. Following on from their 2017 demo cassette and a sling of singles, 2019 saw the release of their debut LP Whoosh!, a studio-based affair that evolved The Stroppies sound, underpinned with a newly discovered melodic classicism. Look Alive!, their latest effort which was recorded only months after the bands return to Australia after their second European tour of 2019, represents a marriage of the two different styles of Stroppies recordings and rounds out an incredibly productive twelve months for the group. Look Alive! Is the sound of The Stroppies honing their craft under new and unfamiliar conditions. Written mainly on the road then finished and recorded at home with whatever was on hand with only three of the four members present, it is according to the band’s singer/guitarist Angus Lord, "an EP forged in circumstance. A sum total of fleeting vignettes on scraps of paper, voice memos and iPhone notepads all collated between soundchecks and long stretches in a tour van rolled pieced together over weekly jams. We didn't want to waste much time when we got home so we opted to record it ourselves". For a band who began with the initial idea to create what the band called “open-ended music, collaged quickly and pieced haphazardly together”, it is in some sense a return to their true self. If Whoosh! glimmered and sparkled with tight production and succinct pop songwriting, Look Alive! is a somewhat darker shade, employing a more diffuse, impressionistic sonic palette and a more obvious penchant for experimentation. Tracked by the band and long time friend/collaborator Alex Macfarlane (Twerps, The Stevens, Hobbies Galore) at home and then mixed and mastered direct off the tape at Phaedra studios in Coburg by John Lee, it’s also a somewhat collaborative project, drawing in influence and inspiration from myriad sources. Such means of production are evident in the resulting eight songs. The title track sees acoustic pianos duel with synthesizers over Pavement-esque guitar wig outs, whilst ‘The Aisles of the Supermarket’ employs tape loops to forge loose ambient foundations. Though these ideas may reflect the band’s noted “stream of consciousness creativity”, remarkably the songwriting remains as sharp as ever. Album opener ‘Burning Bright’ gallops forward with the propulsive energy of ‘77-era Talking Heads and is transported by a casually brilliant chorus delivered by shared vocalist Claudia Sefraty. Elsewhere, lead single ‘Holes In Everything’ presents the band at its pop best: "If I could disappear into the atmosphere, I would be around you all the time" sings Lord, before swiftly throwing shade on the sentiment in the chorus, "It's always frightening what I think". It's this penchant for push and pull of light and dark splashed against the backdrop of trepidation and humour that make The Stroppies records so endearing and open-ended. Though undeniably pop structure orientated, the bands propensity for re-inventing and re-appropriating their recording and writing process ensures that nothing starts to fossilize. Indeed, Look Alive! is that most intriguing of records precisely because it represents two ideas at the same time - the sound of a band in flux, but also the sound of a band becoming more sure footed as they walk their crooked line.