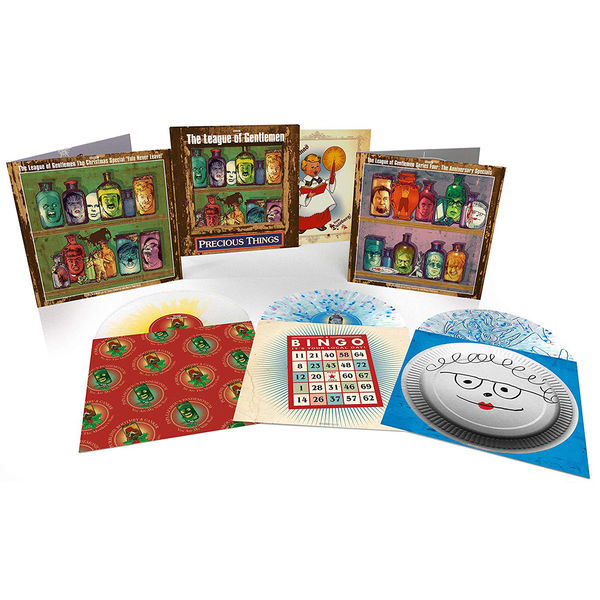 Following on from the success of Demon Records’ sold out ‘Special Stuff’ box set, we present the final instalment of the characters from the fictional town of Royston Vasey in The League Of Gentlemen’s ‘Precious Things’. Pulling together the original Christmas Special for the first time on vinyl (“Yule Never Leave”, first aired on the 27th December 2000), and the three anniversary episodes from 2017 (“Return To Royston Vasey”, “Save Royston Vasey” and “Royston Vasey Mon Amour”, first shown on the 18th, 19th and 20th December 2017). “Yule Never Leave” is presented on 180g “Snow Slash” vinyl, telling the story of Vicar Bernice three unwelcome guests, and is detained from watching the boxing by stories of voodoo spells, German vampires, ancient curses and monkey balls. The three anniversary specials from 2017 are pressed on 3 sides of 180g “Snowglobe” vinyl, with the fourth side an etching of Tubs and Edward trapped forever in a ‘Phantom Zone’ like state. The Anniversary specials tell the story of Benjamin discovering that his late Uncle Harvey is far from dead and buried, Tubbs and Edward setting up shop in a derelict block of flats, Pauline reliving her past with her jobseekers and the continued woes of Geoff Tipps. Starring Mark Gatiss, Steve Pemberton and Reece Shearsmith, the episodes also feature Freddie Jones, Liza Tarbuck and David Morrissey among the cast. The writers are Jeremy Dyson, Mark Gatiss, Steve Pemberton and Reece Shearsmith. Each series is presented in a gatefold set with unique artwork from horror maestro Graham Humphreys, living within a die cut rigid slipcase allowing you to swap over the sleeves to create a different local shop window.