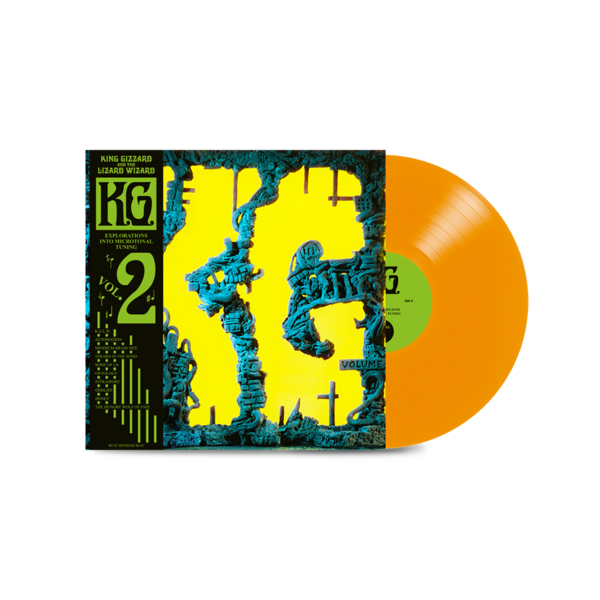 King Gizzard & The Lizard Wizard are repressing their sixteenth album, K.G. n 2010. In the wake of a global pandemic, it’s a collection of songs that saw the six members of the band retreating to their own homes scattered around Melbourne, Australia to compose and record remotely. But have no fear! Not a drop of that unnamed alchemical something that makes this band so special is missing. This is the Gizz firing on all sonic cylinders, for if ever a band were built to swiftly adapt to adverse circumstance then it is them. Hell, on paper Covid-19, with its monstrous yet unseen face, ecological implications and new language, even sounds like an abandoned concept for a King Gizzard & the Lizard Wizard album. Truth be told, the practicalities of the creation of K.G. is a side-issue. It is the contents and the sheer visceral power of music that matters. Music that will live on long after a virus has passed. Back in 2017 the band released Flying Microtonal Banana, now one of their most highly regarded albums. That it was the first of five released by the band that year and was only part the story – a story made all the remarkable by the fact it was recorded using a microtonal musical scale that requires quarter tone tunings, on instruments custom-made for the occasion. It spawned a plethora of live favourites such as ‘Rattlesnake’, ‘Sleep Drifter’, ‘Nuclear Fusion’ and ‘Billabong Valley’ and showed the wider world that the Gizz paint from a palette that extends far beyond the musical colours of western rock. Here were songs in tunings more common in traditional Turkish or Arabic music.

“FMB was one of the purest and most enjoyable recording experiences we’ve had, and the ideas just kept coming” explains de facto band leader and multi-instrumentalist Stu Mackenzie. “But we didn’t think we would play it live as the music dictated a new medium that requires different instruments, new flight cases and so. It was a liberating studio-based experiment which surprisingly translated seamlessly and spawned some of favourite songs to play live.”

So now they return to the microtonal tunings on K.G., an album best described as a pure distillation of the King Gizzard sound, one that cherry picks the best aspects of previous albums and contorts them into new shapes and via defiantly non-Western rock scales. There’s walk-on theme song ‘K.G.L.W’, the celestial disco-funk of ‘Intrasport’, the righteous life-giving staccato rock of ‘Ontology’, epic stoner-sludge closer ‘The Hungry Wolf Of Fate’, which ends the album in abrupt burst of white noise. All come together to represent the next-level of the expanding Gizz sound.

K.G. is both a stand-alone work and also part of a bigger musical picture. More news on that shall be forthcoming – fans of the band know by now that King Gizzard don’t do things by halves. If music were organic matter, then their albums are ever-changing entities: initial highlights are often superseded on further exploration, favourite tracks replaced by less obvious moments, while riffs or bursts of noise from four or five albums back might suddenly rear their heads again.

If the global lockdown of spring/summer 2020 caused disarray amongst those who rely on live performance, then King Gizzard were better placed than most to not only survive but thrive in style during a pandemic. Much of frontman Stu Mackenzie’s creative life had already been spent making bedroom recordings, preparing him for a temporary hermit-like existence out of which K.G. was born.

Nevertheless due to greater external forces globally, K.G. saw a different recording approach when the band found they weren’t living in each other’s pockets for the first time since their formation. Songs were pieced together and given space to breathe, which allowed the music to be entirely free. “It’s almost like an album that normal people make,” laughs Stu. “Almost…”

Aside from stockpiling songs, King Gizzard still found time in 2020 to release the live movie (and attendant album) Chunky Shrapnel, an up-close, unconventional and discombobulating portrait that captured the power and sheer oddness of the live Gizz experience, a tour that culminated in a headline show at London’s historic Alexandra Palace in late 2019.

The release of KG also marks ten years of King Gizzard as an active band, a milestone that allows a brief pause for reflection in an unbroken cycle of touring, recording, filming and building their own world, which exists in a different dimension: the digital realm. Fans call this utterly 21st century interpretation of psychedelia The Gizzverse and continue to fill it with their own array of memes, covers, skits and more – Google the word to slip down a series of endlessly entertaining worm-holes in which there exists an alternate reality that is, at times, preferable to actual reality. To paraphrase Salvador Dali, King Gizzard don’t need drugs, they are drugs. And they have come a long way since their garage beginnings.

“Ten years ago I was 19 and older peers that I looked up to were telling me that music was something you did for a few years, then give up and get a job,” remembers Stu, who grew up in the coastal town of Anglesea, Victoria (pop: 2545). “That was really depressing to me because I was having so much fun, living hedonistically and finding my way. Because I’d picked up a guitar quite late I was playing catch-up to all my friends, so it felt like I had a three or four year window before I was going to be pushed off a cliff. It literally felt like creative death was imminent. So I never foresaw this as a career. God no. And I’ve still managed to avoid getting a job.” 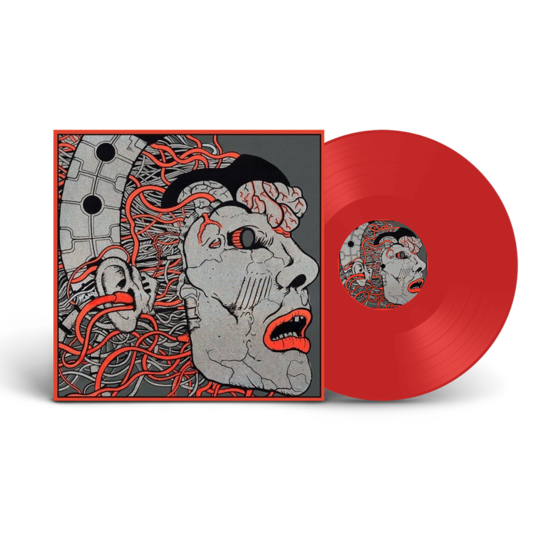 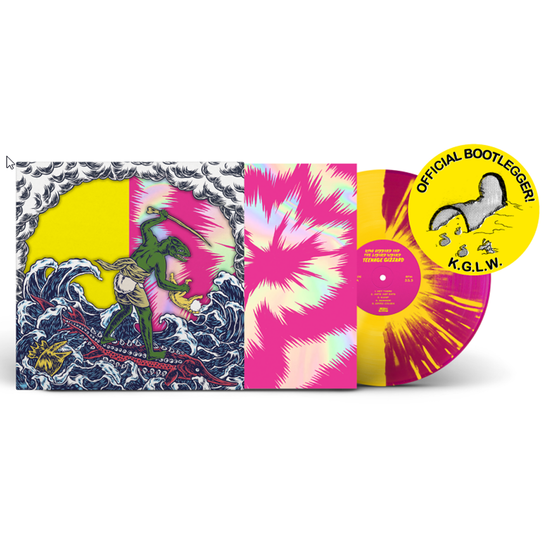 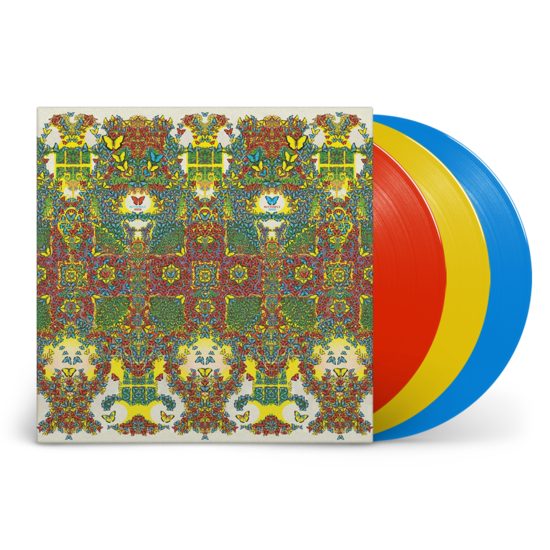 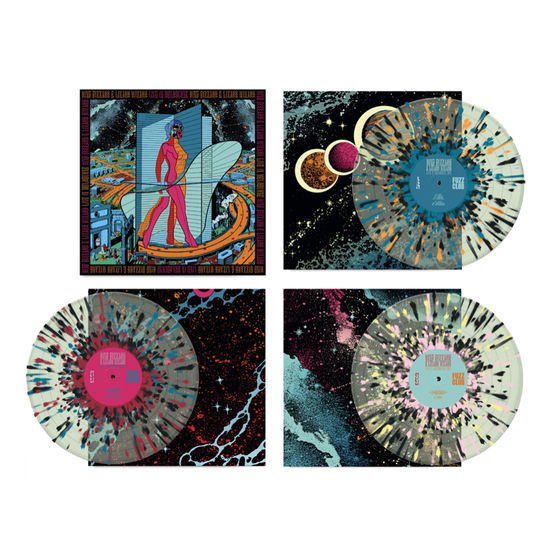 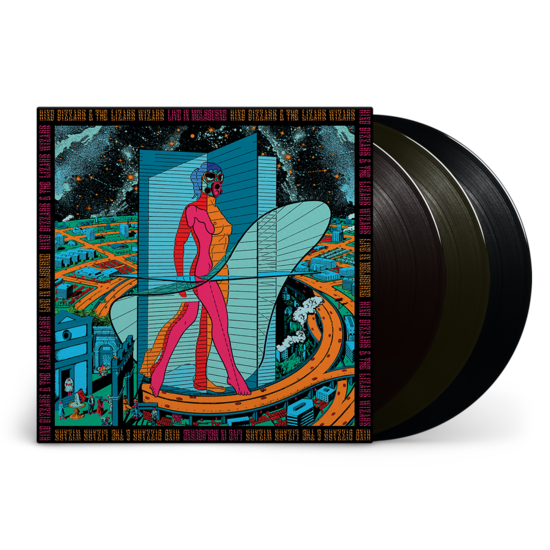 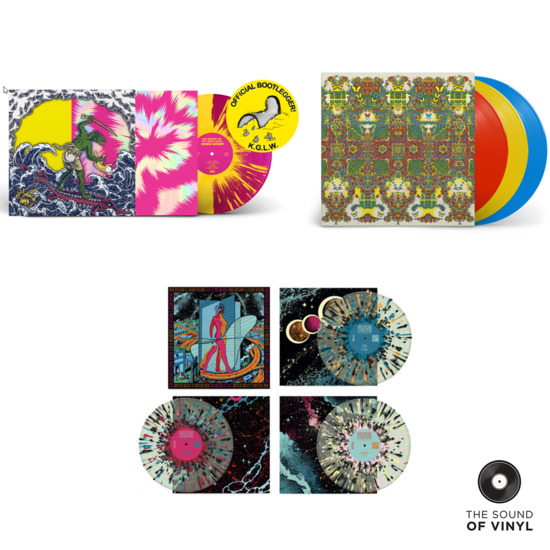 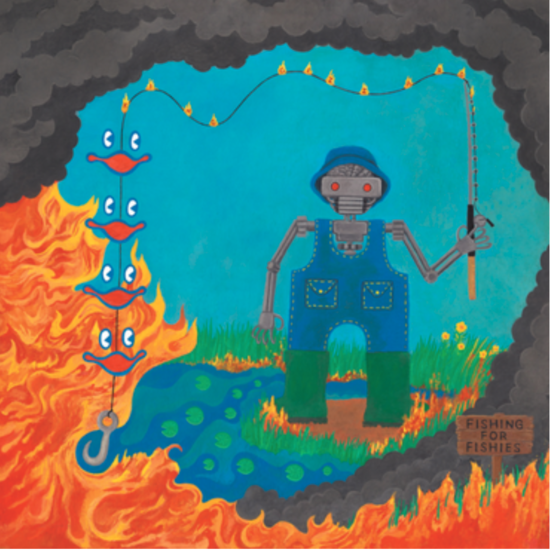 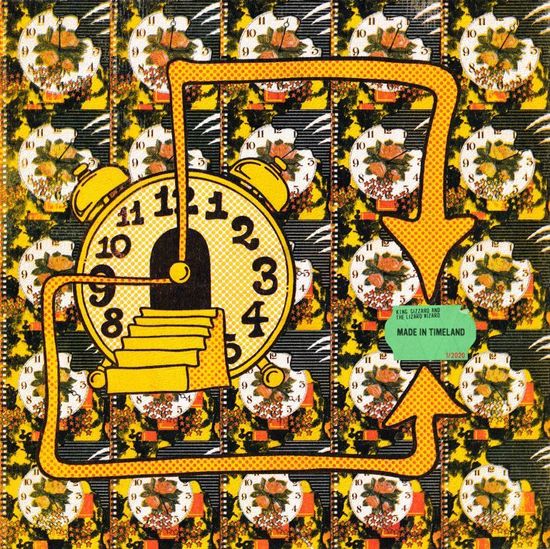 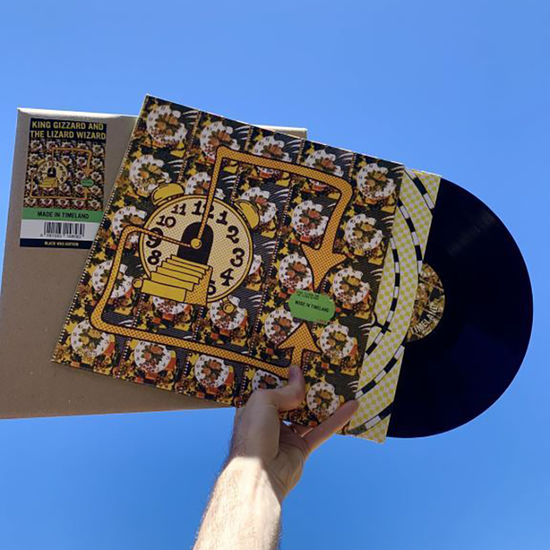 King Gizzard & The Lizard Wizard
Made In Timeland: Black Vinyl LP
Vinyl LP
US$29.99
In Stock 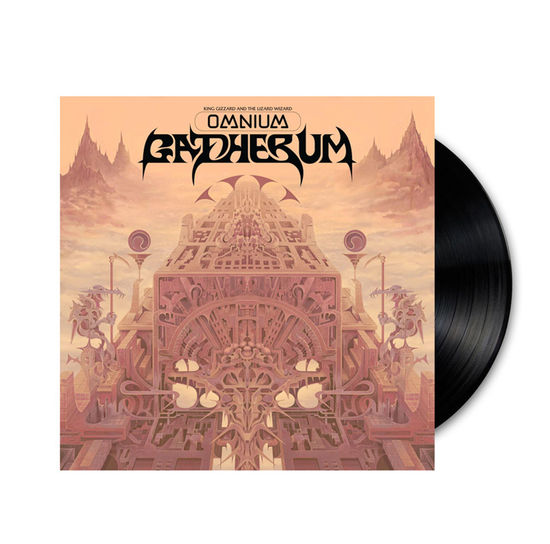 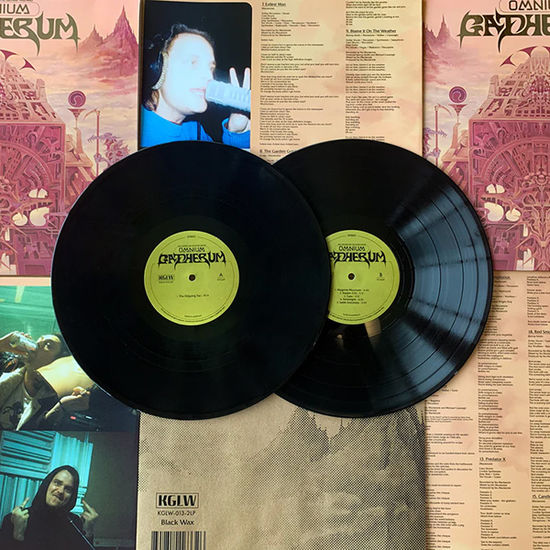 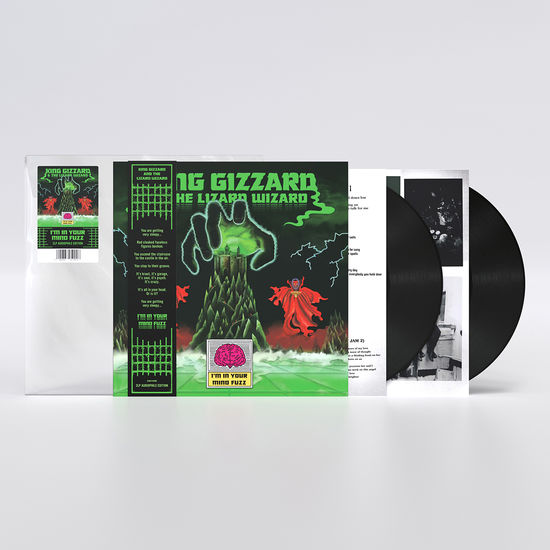 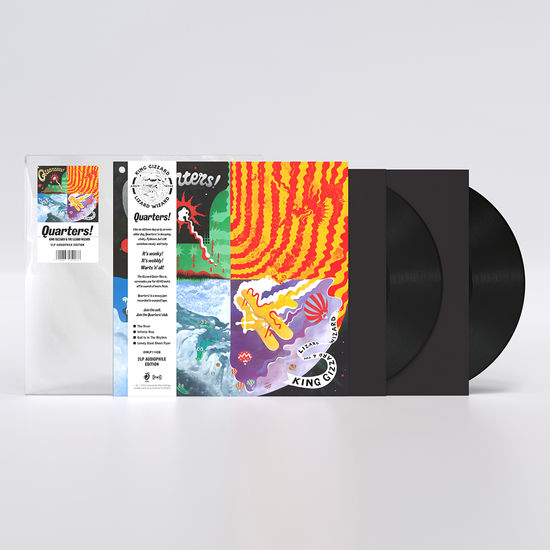 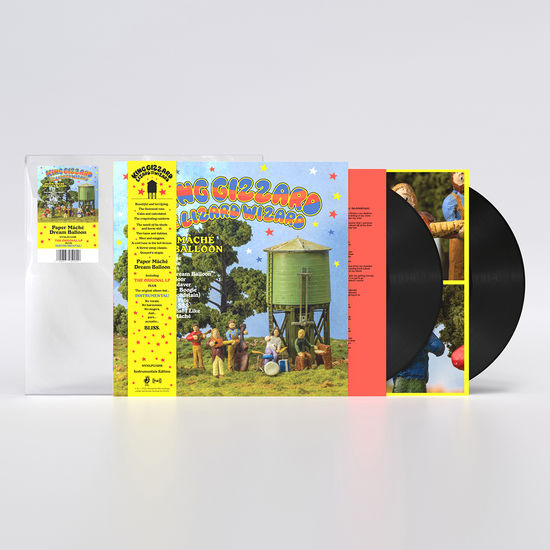 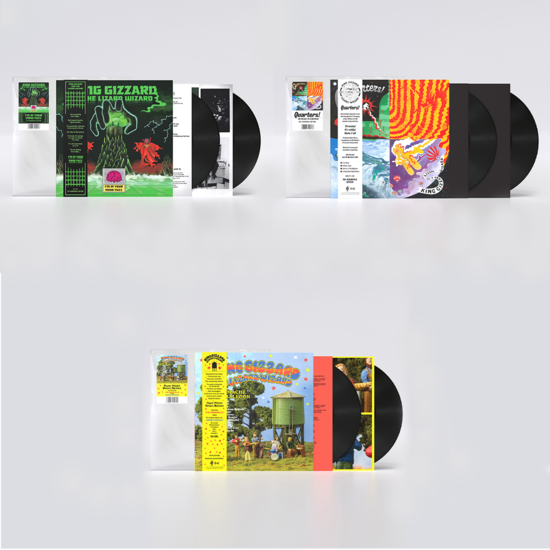 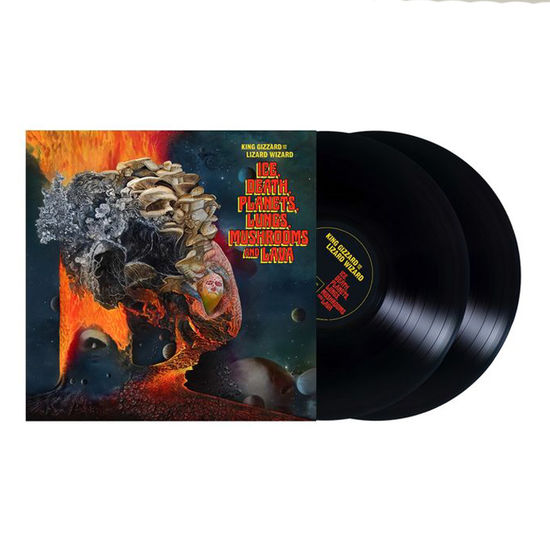 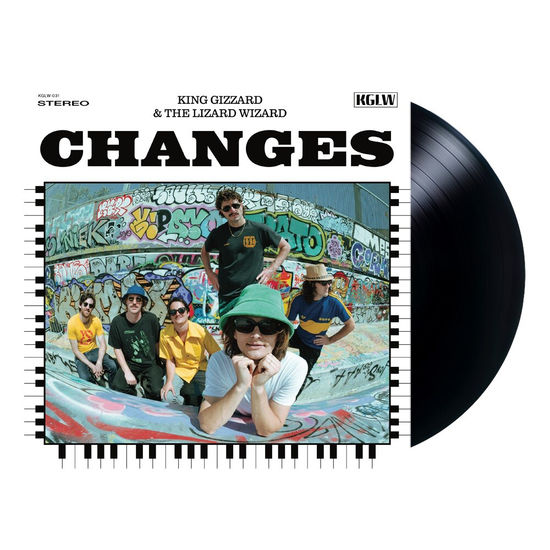 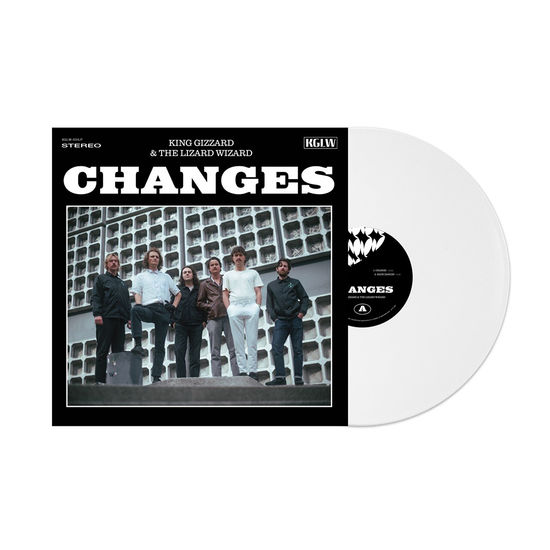 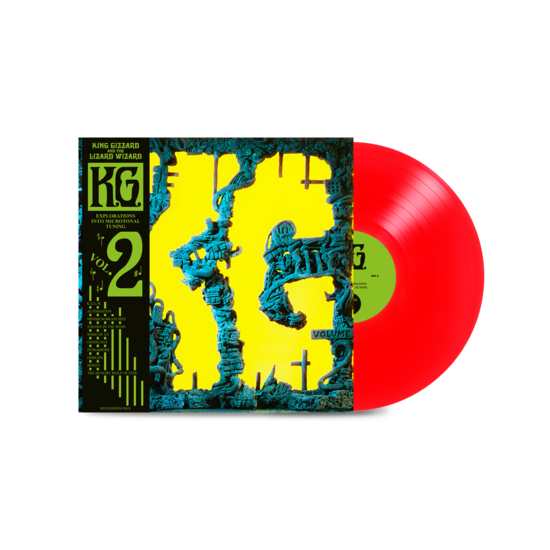