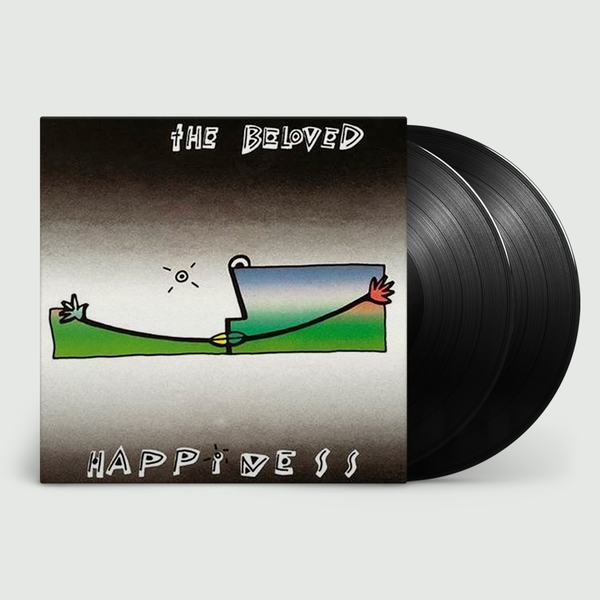 Happiness was recorded from late 1988 to summer 1989, influenced by the band's immersion in the nascent UK Acid House scene. Originally a four-piece guitar/synth band, The Beloved MK1 parted ways late 1987 and founder members Jon Marsh and Steve Waddington were newly liberated by their electronic, machine-driven rhythm section. The perfect synchronicity of the Balearic stylings of the underground clubs and exposure to early Chicago House corresponded with a burst in songwriting and sonic adventure. The result: Happiness! Recorded mostly with producer Martyn Phillips (who subsequently worked with Erasure, Jesus Jones, & Londonbeat) the band created a hybrid of British electronic pop music, US club beats, euphoric mood and consistently optimistic and uplifting lyrics. 'Happiness' was certified Gold (100k sales) in the UK and made numerous Best of 1990 Top 10s across the UK music press, while they graced the covers of NME, Melody Maker, Record Mirror and were featured in The Face, i-D and broadsheet newspapers. They were nominated for multiple awards including Best British Video for 'Hello' at the 1991 Brit Awards. Four singles were released: 'The Sun Rising', which gave The Beloved their first Top 40 hit in October 1989; 'Hello', released January 1990, which peaked at No.19 and led to the band's first appearance on Top Of The Pops; 'Your Love Takes Me Higher', which became their third Top 40 hit in 1990; and final single 'Time After Time'. Happiness Special Edition has been remastered from the original analogue studio masters (by John Davis at Metropolis Studios) and has a significantly louder and clearer audio than the original release. The reissue includes new sleeve notes written by the band themselves. It also includes 'The Wolf Studio Recordings', a 15-track bonus disc of 'Happiness' demos, B-sides, remixes and four previously unreleased songs recorded at Wolf Studios in Brixton between 1988 – 1990. 'The Wolf Studio Recordings' Wolf was a small studio in Brixton where Jon & Steve honed their craft with the available synths and drum machines and the expertise of engineer Dominique Brethes. The disc comprises recordings from January 1988 to September 1990, all in the same environment with the same engineer, so has its own, clearly defined sound.