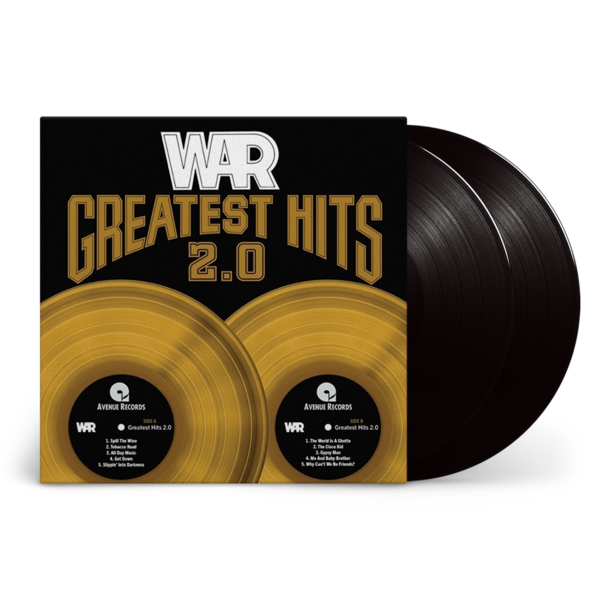 WAR’s head-nodding mix of music and message started a revolution 50 years ago that continues to win over the hearts and hips of fans around the world. “Greatest Hits 2.0” will be available 29th October and is a new, career-spanning collection that expands on WAR’s platinum-certified 1976 greatest hits album, featuring the legendary songs “Spill The Wine,” “Low Rider,” “Galaxy,” and “Why Can’t We Be Friends?”

WAR’s “Greatest Hits 2.0” 2LP contains 20 tracks, 2CD contains 24 tracks recorded between 1970 and 1994, including the gold-certified singles “Slipping Into Darkness,” “The World Is A Ghetto,” “The Cisco Kid,” and “Summer.” Another gold single, “Why Can’t We Be Friends?” stayed on the charts for 31 weeks and became the soundtrack to the US-Soviet space mission where astronauts and cosmonauts linked up in the spirit of friendship. In the modern era, it has been streamed more than 100 million times. Also included is the #1 R&B smash “Low Rider,” which was inducted into the Grammy Hall of Fame in 2014.

In the collection’s liner notes, Los Angeles Times columnist Gustavo Arellano says GREATEST HITS 2.0 does more than capture WAR at its creative and commercial peaks. He writes: “All the big hits are here, of course, in chronological order from the Eric Burdon days up through cuts from 1982’s underrated Outlaw…But what I love about this collection is that it’s a symphonic suite for a perfect Southern California Sunday afternoon, the kind the rest of the world wants to experience but can only dream about. You can envision it by playing these albums from start to finish.”