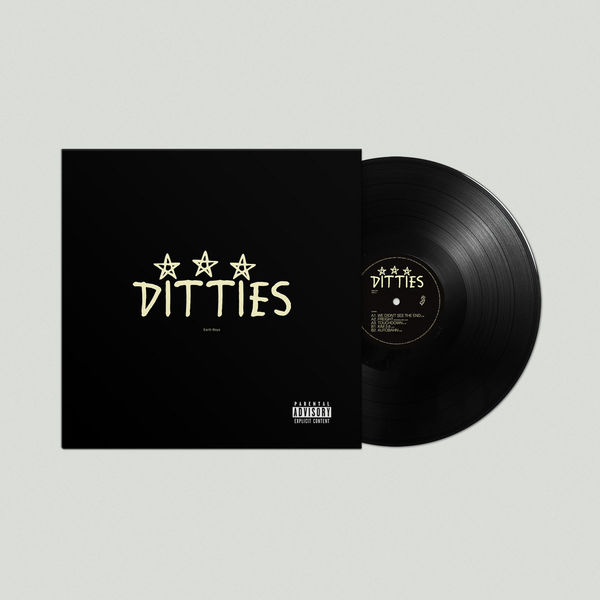 Known for driving lo-fi house tracks, funky breakbeats and their annual epic 4-20 mix, the duo of Julian C. Duron and Michael Sherburn (also of DUST) have taken a more playful turn on their twelfth vinyl release as Earth Boys. As its title suggests, DITTIES is a lighthearted yet earnest dance-pop EP, featuring catchy melodies, conversational lyrics, and whimsical storytelling. Lyrically, it draws on both nostalgic memories of raves past (We Didn't See the End, Freight, KIM 3.6) and dreamlike fictional scenarios (Touchdown, Autobahn) to craft a timeless paean to dance music through the years.

For this project, the duo mined their decades of experience as NYC rave stalwarts for inspiration. Intro track "We Didn't See the End" is a personal and poetic tune that sees Duron recounting his first memories producing music, promoting events, and relocating to NYC in the early 00's. “When I played my first show, it was for no money,” he muses in a casual, conversational tone, “it was on the concrete, it was me and my homies.” Later, on “KIM 3.6”, he recalls his time operating an illegal weed delivery service in New York. “The service just had cards that said KIM with the number on the back, ‘Keep it Moving’ like the Tribe Called Quest track. ‘3.6’ because our bags were .1 grams over the weight of an 8th,” he explains. “Our edge was actually just an honest deal. I thought a song about this would be fun.”

Lead single “Freight” has a similar, if more universal, air of nostalgia. An homage to Duron’s hometown of Dallas and its connection to early American rave culture, the track is a wistful celebration of underground warehouse raves, where people gather “like some freight”. The accompanying music video (also sourced / directed by Duron) is comprised of footage shot between 1996- 2000, and features sweeping shots of old Dallas, large-scale raves, legendary cameos (Dieselboy, Dara, Reid Speed, DJ Redeye, and more), and most importantly, as Duron puts it, “no cops, no security team, not too many cameras or phones around, just 1,000+ kids vibing in a warehouse.” While the song itself is not arranged like a typical House track –it’s a pop song written on a lofi deep house loop, like The Song that Never Ends –the lyrics and music encapsulate a message as old as dance music itself: get together and dance!

This is the through-line of all the songs on DITTIES, even those that feel less diaristic. EP closer “Autobahn”, for instance, is a chugging ode to the foundations of dance music; namely Juan Atkins / Cybotron and Kraftwerk. It plays like a techno action film: screeching tires and gunshot sounds are woven into the dancefloor-ready beat for maximum cinematic effect. Though it differs sonically from tracks like “Freight” and “Touchdown”, it reflects the same deep and studied love for dance music in all its forms. The songs on DITTIES may have a playful air, but they also have a palpable depth; the kind that could only come from decades in the scene.