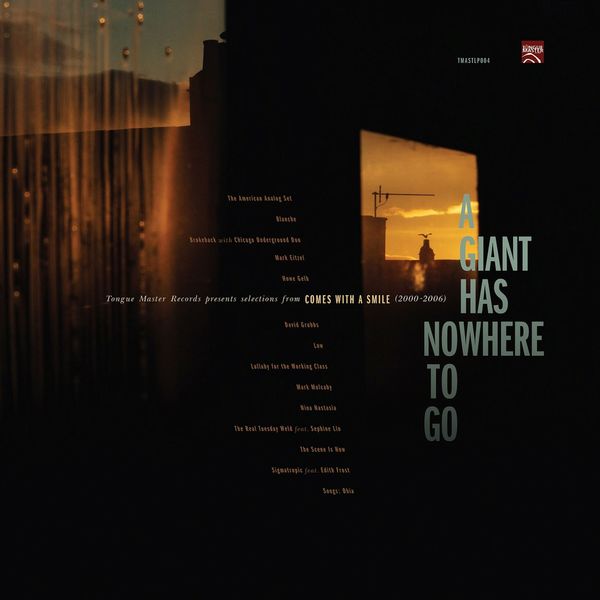 A Giant Has Nowhere To Go: Tongue Master Records Presents Selections From Comes With A Smile (2000-2006): Vinyl LP + Bonus 7" Single

A Giant Has Nowhere To Go: Tongue Master Records Presents Selections From Comes With A Smile (2000-2006) is a celebratory vinyl-only release drawn from the magazine's sixteen cover-mounted compilation CDs. Across some 300 tracks, the magazine presented previously unheard tracks from its eclectic array of interviewees drawn from the worlds of the Singer Songwriter, Americana, Post-Rock, Electronica, and all things Indie.

Comes With A Smile's designer / editor Matt Dornan’s association with Tongue Master Records began with the first TM 7" and has continued to the present day. In some ways the association has come full circle with this curated release. The selections on this album represent the place where the worlds of Tongue Master and Cwas converge. Most remain exclusive to the magazine, and all appear on vinyl for the first time.

Side one features artists who appear in the Tongue Master discography - from established masters Mark Eitzel, Mark Mulcahy and Howe Gelb to the equally idiosyncratic stylings of New York’s The Scene Is Now, Athens’ Sigmatropic (featuring Edith Frost) and London’s cinematic The Real Tuesday Weld. The latter revisits a CWAS favourite, featuring a newly recorded vocal by Sephine Llo, exclusive to this release. Other contributions include intimate demos from Eitzel and Gelb (better known in embellished form by American Music Club and Giant Sand respectively), to standalone gems like Mulcahy’s “Elephantine” (which gives this collection its title) and the bruised avant-garde blues of The Scene Is Now’s “The Word”.

The tracks on side two and the accompanying 7” are a diverse selection drawn from the sixteen CDs CWAS issued between 2000 and 2006 that reflect and complement the oeuvre of Tongue Master Records. Here you will find the dense literature-infused art-folk of Lullaby For The Working Class, the sparse acoustic balladry of Nina Nastasia and the curious Matmos-enhanced stylings of veteran polymath and fellow New Yorker David Grubbs. In their wake comes an epic jazz-tinged duel between Douglas McCombs’s Brokeback and sometime labelmates Chicago Underground Duo, and the raw gothic Americana of Blanche. The LP concludes with a haunting lo-fi lament by the sorely missed Jason Molina in his Songs: Ohia guise. The 7" presents two further gems: a concise edit of the lengthy title track from a 2005 12” tour EP from CWAS regulars The American Analog Set, and an acoustic rendition of a track from the album ‘The Great Destroyer’ by shapeshifting veterans Low from the same year.

Together the fourteen tracks hint at the breadth of the CWAS archive, a treasure trove from a not-too-distant musical past. With full lyrics, a special four page insert tracing the history of the magazine, and an Alex Wharton Abbey Road cut, this quality release is a testament to the legacy of Comes With A Smile.