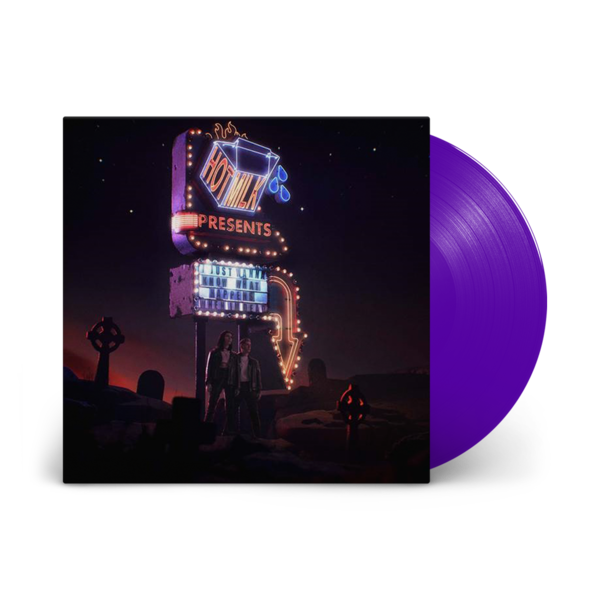 • Formed in 2018 after meeting in Manchester • Self-released first EP in 2019 ‘Are You Feeling Alive?’ • Amassed 10M+ Spotify streams • Toured with Foo Fighters, You Me At Six, The Faim and others • Played festival slots at The Great Escape, Truck, Slamdunk, Download, Reading and Leeds • Candy Coated Lies and Awful Ever After both Radio 1 Rockshow ‘Rockest Records’ • Playing Reading and Leeds Mainstage in August 2021 • Playing Mainstage Download (June 2021 Test Event) FOR FANS OF: Creeper, My Chemical Romance, Paramore, Yungblud

‘Bubbling with frustration but cut with a The !975-like lust for life’ NME ‘Absolutely brimming with confidence and slick accessibility’ Kerrang! ‘One of the most exciting new rock acts around’ Music Week

Power punks, Hot Milk, have announced their second EP, ‘I JUST WANNA KNOW WHAT HAPPENS WHEN I’M DEAD” via Music For Nations. It follows the success of the band’s first EP, 2019’s ‘Are You Feeling Alive?’, a fizzy collection of gutsy emo-pop which established them as one of the most exciting new bands in the UK. Their 2019 was a whirlwind year that saw them tour with Foo Fighters, Deaf Havana and You Me At Six, as well as playing some of the UK’s biggest festival stages. The band were formed in 2018 by vocalist and guitarist duo, Han Mee and Jim Shaw, two friends who met working behind the scenes in the Manchester music scene. Yet they yearned to be in a band themselves. “We got to the point where we were why not? What else have you got to lose?” says Jim. “We thought, we can go for this or we can get to 60 and know we didn’t do right by ourselves.”

Debut EP, ‘Are You Feeling Alive?’, which was penned during a drunken songwriting session, was an effervescent refusal to settle for second best in life. “We’ve both realised that life you don’t get another face,” Han continues. “You get one face and then you’re done, and you will never exist ever again.”

That sense of not letting life slip through your fingers is at the core of Hot Milk’s punk-indebted ethos. And having taken a leap of faith to grasp their platform, the band, completed by bassist Tom Paton and drummer Harry Deller, aren’t about to let it go to waste. “Art is about your interpretation of your own experience,” adds Jim. “The first EP was written five years ago. We’ve grown up and realised who we are and what the world is like right now.”

‘I JUST WANNA KNOW WHAT HAPPENS WHEN I’M DEAD’, which was produced by Jim Shaw, is another vivacious call to arms, rammed with sharp hooks and huge, catchy choruses, to encourage everyone, everywhere, to follow their dreams. But elsewhere, the lyrics are more personal, with the band bottling the anxieties and frustrations of their everyday lives. ‘Woozy’ openly tackles depression, ‘Good Life’ takes on societal corruption and the distribution of wealth, while elsewhere the band address the pursuit of happiness in a modern world.

“These songs are honest,” says Han. “I have nothing to hide. Everyone’s on antidepressants these days. It’s the world we live in, it makes people sad. Capitalism. Is it broken? 100 per cent. I’m angry that the fact that we’re sold a world that actually doesn’t make your inner peace happy. Humans need love and community and a lot of the time, there is no love and the community has dissolved.”

“The anger resides in us at the unfairness of the world,” adds Jim. “Online communities are all about flexing and battling your peers to look or sound a certain way that is better than everyone else. It’s constant and it’s dangerous. You’re teaching kids that to be content, you have to be best. It’s a question again. Are you really living?” “We’re angry, both politically and existentially in terms of the system we now live in. But also, we’re angry at the fact that we’re sad quite a lot,” continues Han. “But we’re trying to not just sit there and take it. We’re trying to fix it, by building a family through this band.” Walk into any Hot Milk show and you will feel that sense of community. Through their honest lyrics and inclusive approach, the band say their aim is to create an “aggressively space safe” where fans are empowered to be themselves, “authentically and unapologetically”, as well as opening up a dialogue for people to talk. That will become clear later this year when the band get their chance to air the new material. This summer, they will return to Reading and Leeds Festivals, this time to play the main stage, as well as embarking on a headline UK tour in September. And believe, when the times comes to finally get back into those sweaty pits, these new songs will provide the perfect, life-affirming soundtrack.

“Life is fragile,” says Jim. “You can’t take things with you, but you can make the best memories. That’s the most important thing in life. Your currency is your memory.” “What you can take with you is something that absolutely makes the blood pump round your veins and gives you goosebumps,” agrees Han. “That’s what this band is to us. It’s our passion. That’s what this EP is about.”