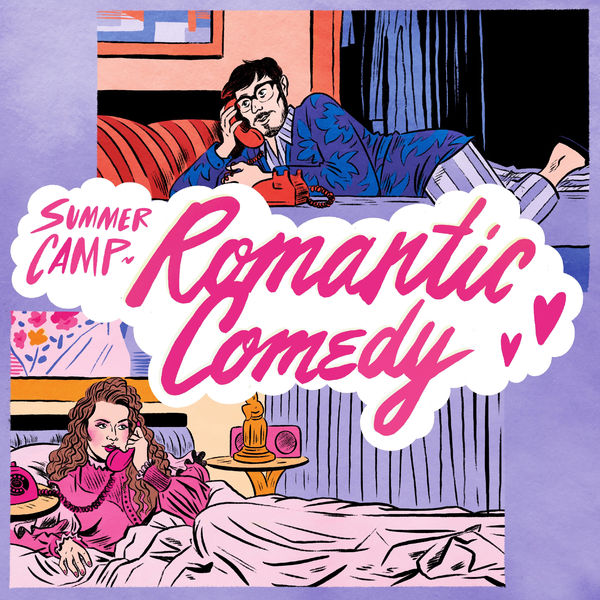 Beloved British indie-pop duo Summer Camp - AKA married couple Elizabeth Sankey and Jeremy Warmsley share details of their new album Romantic Comedy, their first new record since 2015. Romantic Comedy will be released on Valentine's Day via Apricot Recordings, and is the companion piece to Sankey’s feature documentary film debut of the same name, which last year premiered at prestigious film festivals IFFR (Rotterdam), SXSW (Austin, Texas) and AFI Fest (LA). Summer Camp new single ‘Women In Love’ from the record. About the new track the duo say: “'Women In Love' is about falling for a woman who is packed full of idiosyncrasies and complexity. Obviously the manic pixie dream girl trope of rom coms has been discussed in great detail, but for us this song is less about those more modern heroines, and more about the classic rom com queens who completely befuddle and complicate the lives of the men who are attracted to them. It's Katharine Hepburn in 'Bringing Up Baby', Marilyn Monroe in 'Some Like It Hot', and Goldie Hawn in 'The Housesitter'. It's about how their love interests feel so lucky to be adored by such strange, complicated, and surprising women.” Summer Camp’s new album Romantic Comedy features songs from and inspired by Sankey’s film, and the experiences and movies that compelled her to make it, intercut with snippets of Warmsley’s instrumental score and samples from the documentary. The band describe the album as “a painfully honest love letter that both celebrates and skewers the way romance has historically been portrayed in cinema, and how these depictions have affected the way the audience conducts and pursues their own relationships.” The film is a sometimes sardonic, sometimes loving, but always personal exploration of this much-maligned genre, told through clips from over 160 films including When Harry Met Sally, God’s Own Country and His Girl Friday and interviews with actors, filmmakers and writers including Jessica Barden (star of End Of The F*cking World). To coincide with the film’s premiere, Summer Camp last year shared lead double A-side singles ‘Love of My Life’ / ‘Danny and John’, a first taste of new music from Romantic Comedy. ‘Love of My Life’, the first cut from the album, is a 60s-inspired pop banger that longs for a lost love, the one that got away, while ‘Danny and John’, which doesn’t appear on the film’s soundtrack, was inspired by classic rom-coms like Sleepless In Seattle and In & Out.