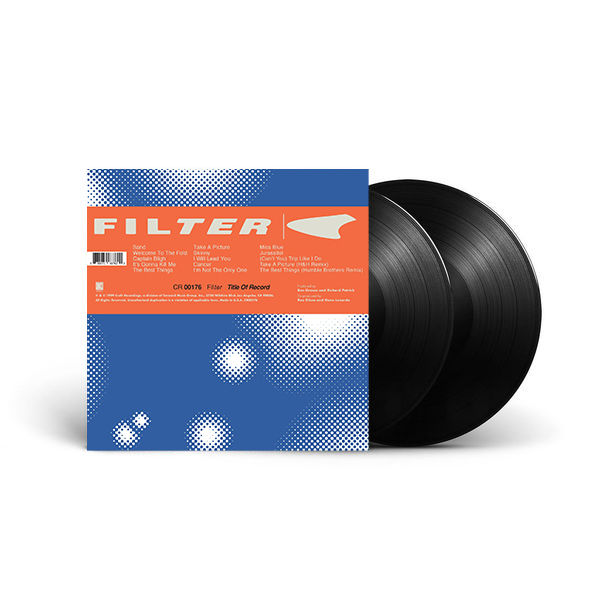 Craft Recordings presents a deluxe, 20th anniversary reissue of Filter’s platinum-selling, sophomore album ‘Title of Record’. The album has been remastered and will be available on vinyl for the first time, as well as on CD. All formats are expanded featuring four bonus tracks: “(Can’t You) Trip Like I Do” (originally recorded for the cult-classic soundtrack Spawn The Album), “Jurassitol” (previously released on The Crow: Original Motion Picture Soundtrack), plus remixes of the singles “The Best Things (Humble Brothers Remix)” and “Take a Picture (H&H Remix).” Both the two-LP set, and CD will feature newliner notes by author, journalist, and Side Jams podcast host Bryan Reesman. Following four years as a touring guitarist for Nine Inch Nails, primary member Richard Patrick formed Filter in 1993 with guitarist and programmer Brian Liesegang. Their 1995 debut, ‘Short Bus’, blended industrial pop with post-grunge metal, and became a best-seller. First released in 1999, ‘Title of Record’ was a sonic breakthrough for the Cleveland band. Despite dark themes, the album was melodically diverse, offering a more radio-friendly sound than debut album ‘Short Bus’, with lush, vocal harmonies, introspective lyrics and even touches of psychedelia. Perhaps the best example of this is in the album’s second single, “Take a Picture,” which would go on to become the band’s biggest hit. Upon its release, ‘Title of Record’ was a commercial victory, peaking at the Number 30 spot on the Billboard 200, and opening the door for nearly a year of touring by the band. The album also won wide critical acclaim - Entertainment Weekly declared that Filter’s “Attention to melody and craft is refreshing,” while Rolling Stone praised Richard Patrick as, “The most expressive and daring of the new industrial rockers, the most willing to expose the vulnerability that lurks behind the jackboots and black leather trench coat.” Listening to the album again, 20 years later, Richard Patrick reflects, “Title of Record is Filter’s crowning achievement. Our signature album. It’s amazing how much I loved making this record even though it almost killed me.”