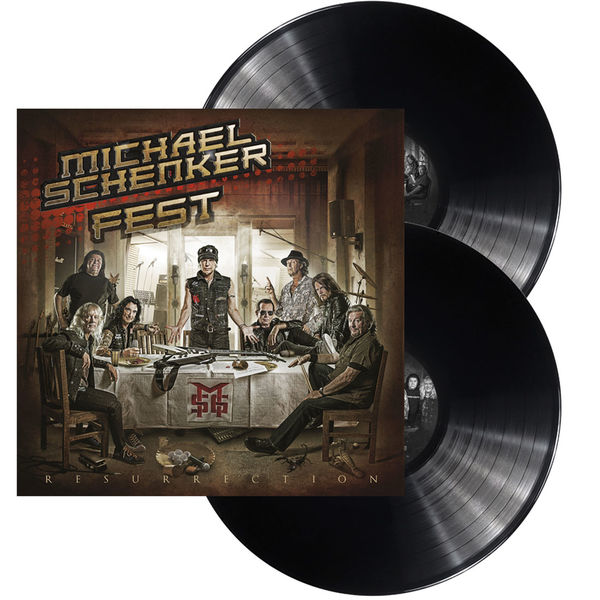 With a career stretching back to 1969, the German guitar virtuoso is an artist whose musical contribution in the ‘70’s with the Scorpions and UFO had an extraordinary impact on future generations to come.

Recorded with singers and musicians associated with Michael in previous decades, the aptly-titled ‘Resurrection’ sees Schenker embracing his past to build something fresh and exciting.

In 2016, Schenker put together Michael Schenker Fest, a tour featuring former Michael Schenker Group vocalists Gary Barden and Graham Bonnet, plus Robin McAuley of the McAuley Schenker Group. Instrumental back-up was provided by former MSG bass player Chris Glen and drummer Ted McKenna, plus guitarist/keyboard player Steve Mann, also of the McAuley Schenker Group. These shows were so rapturously received by audiences across Japan and Europe that it seemed only logical for the protagonists to make new music together. The decision to bring in Doogie White, singer of Schenker’s Temple Of Rock, added more completion to Michael’s full establishment up to date. ‘Resurrection’ took around 6 months to piece together, using multiple studios on both sides of the Atlantic. Metallica guitarist Kirk Hammett (a long-time fan) also appears on the album’s opening track ‘Heart And Soul’.

From the light and shade of ‘Warrior’ to the pacy ‘Heart And Soul’ via the commercial ‘Night Moods’ and ‘Time Knows When It’s Time’ and Michael’s instrumental piece ‘Salvation’, ‘Resurrection’ is a classy, varied album. “It is snappy and melodic, but it’s also dramatic and fast – all of the elements are there,” states Schenker.

Schenker’s original plan was for Barden, Bonnet and McAuley to record a few songs with all singers singing together rather than just having each singer sing 3 songs and that’s it. That would have not been exciting enough” Schenker adds. Eventually two tracks – ‘Warrior’ and ‘The Last Supper’ – required all four vocalists together. Though at times it was impossible to get everyone together at once, on occasion many of the players and singers shared room space and the resulting sense of fun and camaraderie is only too apparent.

Indeed, Schenker clearly enjoyed making this record with his faithful Lieutenant Voss-Schoen, who he says, “went the extra mile time after time.” (Voss-Schoen also co-wrote five of the album’s songs and contributed backing vocals).One of the best elements of ‘Resurrection’ is the suitability for each singer to their chosen song, also the blend of the voices when performing together. “Each has something that the others don’t.

It all began in 2008 with the sudden lifting of the crippling stage-fright that he had been plagued by for all of his life. On the Michael Schenker Fest dates, fans were astonished that Schenker was suddenly laughing and joking from the stage.“Now my state of mind is very different,” Michael admits. “I had been out of the machine for so long, but nothing scares me anymore. From here onwards I’m just going forward. Maybe in the future we could call it The Ultimate Michael Schenker Fest and have Klaus [Meine of the Scorpions] and [UFO’s] Phil Mogg join us on Stage and maybe even sing on the next album? “