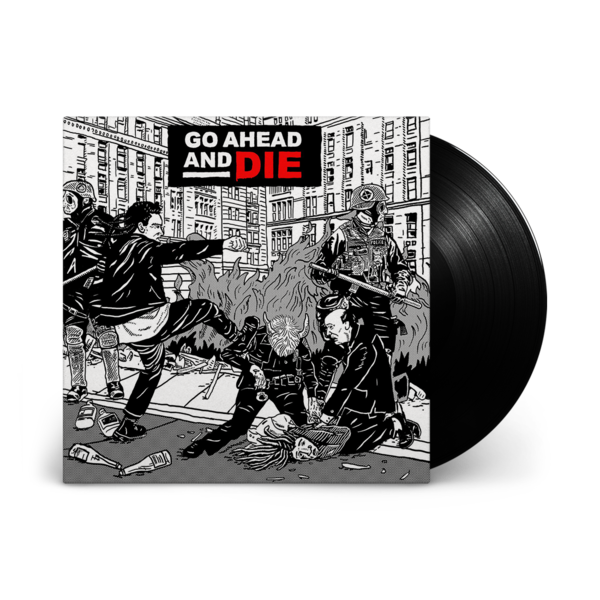 Go Ahead And Die

The Cavaleras are just like most families. Who doesn’t appreciate a father/son trip to somewhere remote and relaxing? Except when Max and Igor Amadeus got away together for some quality time, they devoured horror movies and made one of the sickest old-school thrash/death albums in decades. GO AHEAD AND DIE is a raw, urgent, unrelenting, thrillingly shocking, and vibrant new band. It was born from the mind of creative writer and musician Igor Amadeus Cavalera and the bond of blood and music he shares with his dad, extreme metal icon, and SOULFLY band leader Max Cavalera. Its tempos are wild, its contempt for modern social ills palpable, its riffs monstrous and captivating. They make angry, spiteful, utterly engaging, spirited extreme music for increasingly extreme times. The self-titled debut sees Max and Igor splitting guitar and vocalist duties, with utter madman style drumming from Zach Coleman of the blistering BLACK CURSE and critically-acclaimed KHEMMIS. It sounds like a relic from the glory days of thrash, proto-death metal, and filthy rotten punk, the kind of band that would inspire a teenaged thrasher in 1987 to carve the G.A.A.D. logo into a school desk. As frontman for HEALING MAGIC, Igor indulges his passion for doomy stoner riffs, J.R.R. Tolkien and related fantasy storytelling, and psychedelia. Killer Be Killed (Max’s band with guys from Mastodon, THE DILLINGER ESCAPE PLAN, and CONVERGE) ventures into increasingly dynamic and heady textures. GO AHEAD AND DIE is an opportunity for both Cavalera men to swim in chaos, bile, and sonic force. The spirits of crust-punk and early grindcore are alive and unwell in GO AHEAD AND DIE. It’s palpable. Classic bands like DOOM, ANTI CLIMEX, ENGLISH DOGS, EXTREME NOISE TERROR, and DISCHARGE are all reference points. There’s also the sloppy bludgeoning power of bands like HELLHAMMER and the ferocity of TERRORIZER and NAPALM DEATH. (Jeff Walker, one of the guys from CARCASS, even designed the group’s logo.) These are all bands loved by both Max and his son. The senior Cavalera credits Igor with keeping him in the know about young bands, too, like FULL OF HELL and BLACK CURSE. Titles like “Truckload Full of Bodies,” “El Cuco,” and “Worth Less Than Piss” hint at the devastation to be heard. Across 11 paint-stripping songs, GO AHEAD AND DIE exorcises pain, anguish, and confrontation. No societal ill is safe: the pandemic, religious zealots, crooked cops, politicians who put kids in cages, abusers of all stripes, destroyers of the environment are all in this album’s crosshairs. At a remote mountain property in the middle of nowhere, in the Arizona desert, the Cavalera boys spent three or four days per week writing riffs together and the evenings watching the collection of dusty VHS tapes left behind on previous family trips. The Universal Monsters movies of the 1920s and 30s; White Zombie (1932); Psycho (1960); and a host of other black-and-white classics were on the menu. Full-color action classics were on hand, too, like Point Break (1991) and Falling Down (1993). It was essential to keep that purity of intention and vibe in the studio, especially to Igor. “I didn’t want this to be written like an old school record but then recorded in a modern way. It just wouldn’t have come outright. I was the one laying the hammer down about that from the beginning. Like, ‘Dude, this kind of sounds like shit, and it’s awesome.’ If I got a weird look, I’d play it back to them again.” Vocals weren’t tracked over and over in the pursuit of some kind of “perfect” takes. Coleman didn’t play to a click-track. The heart and soul of GO AHEAD AND DIE is all about just going for it, the traditional way. Engineer Charles Elliot, a guitarist in ABYSMAL DAWN, captured the sessions. The album was mixed by Arthur Rizk, whose credits include POWER TRIP, CRO-MAGS, and CAVALERA CONSPIRACY, the band featuring Max alongside Igor’s uncle, SEPULTURA co-founder Iggor Cavalera.