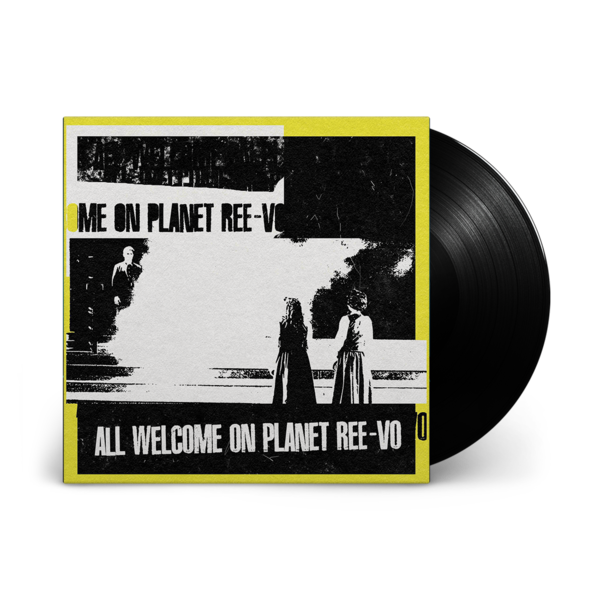 The LP ‘All Welcome on Planet Ree-Vo’ due for release on 29th July could only really have been made in one city steeped as it is in Bristol’s decades of less conventional hip hop and bass music. Tweaked and fine tuned during the summer of 2020 the record punches with a mix of red eyed paranoia to a playful future funk.

The album was all recorded, produced and mixed by Andy at Christchurch Studios, Bristol (home of Mezzanine era Massive Attack) with all vocals written and performed by T. Relly.

During 2021 the first two singles from the LP were released. The first was the juggernaut that is ‘Groove With It’. T. Relly growling out polemic against the relentless cacophony spun by Andy Spaceland, The brutality of the bass and horns is temporarily smoothed with Relly’s soulful, swaggering placation of ‘Turn your speakers on/ Till ya speakers blown baby/ If you’re feeling strong baby/ We can keep it going baby’. This was followed in April by the 12” release of Combat featuring a thumping remix by Surgeon (Tresor Records) and an extended electro remix by Ree-Vo themselves.

2022 began with the limited red 7” release of remixes by NØISE and Batbirds with stunning original artwork by Shepard Fairey who came to the project via mutual friend Joe Cassidy (Butterfly Child).

‘Spacebox’ which will be the last single to be released in time with the album is their hookiest, a party throwing chorus spinning tipsy visitors around the intergalactic control booth of mission control. “Lift off, blast off, shirt off, dance off! Naked in the dancehall SPACE BOX!” is the beamed mantra, Relly transmitting to all occupants of the galaxy.

“We wanted to make a hedonistic and colourful dancehall track, a bold response to the suppressive circumstances of the last two years”.