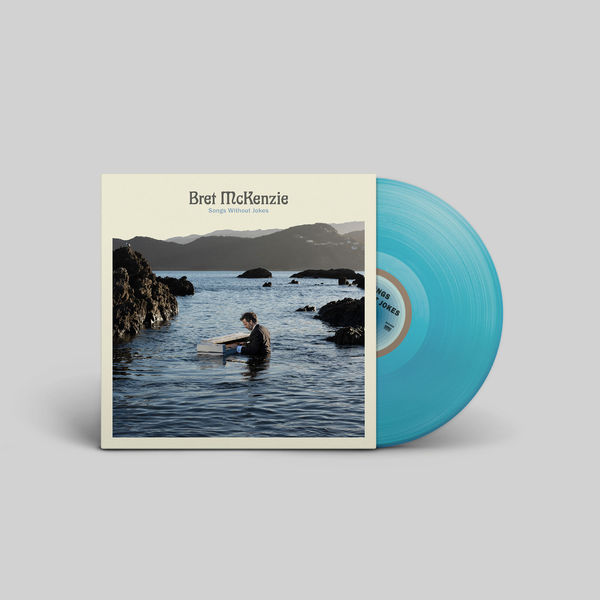 As you can probably glean from the title, Bret McKenzie—whom you know from such modern musical treasures as comedy duo Flight of the Conchords, the Muppets movie reboots and other ace kid-film soundtracks, Lord of the Rings fan blogs, guest songs for The Simpsons, cycling around the streets in his native New Zealand, and more— has a new solo record coming out filled with songs that ARE NOT COMEDY SONGS! There. Doesn’t that feel better? Sometimes it helps just to get it out in the open. So, yeah, Bret’s a ridiculously funny dude, and you might even call him one of the best comedy songwriters in the biz. (In Bret’s own words, there are fewer than a dozen people in the world writing comedy songs today, but who’s counting?) He’s had smash hits, he’s won major awards, he’s the better-dressed part of his duo...he’s got a good thing going! So, what gives with this whole “songs without jokes” solo stuff, man? The Conchords landed McKenzie and Jemaine Clement a hit HBO TV show, a BBC Radio series, chart-topping records, world tours, a Best Comedy Album Grammy, and a 2018 “reunion” special. McKenzie transitioned to Hollywood, writing songs for 2011’s The Muppets (winning a Best Original Song Oscar for “Man or Muppet”), 2014’s Muppets Most Wanted, and films in the Pirates! and Dora canons. While he enjoyed and excelled at the work, he wondered where his songs might go if set free of all that plot-bound specificity. And so, while in Los Angeles a few years back, recording movie music with a crack assemblage of legendary session musicians, McKenzie started playing around with a tune or two he had written simply as songs—songs without any external direction, songs without plot-pushing concerns, songs without jokes. The results reveal McKenzie’s talents on multiple instruments (he’s a veteran of several non-comedy bands in New Zealand back in the day, most notably the reggae-based fusion group The Black Seeds), and his affinity for wry, literate artists like Harry Nilsson, Steely Dan, Randy Newman and Dire Straits.

Written mostly during the quieter moments of 2019, with his life split between work in Los Angeles and his family in Wellington, the songs of Songs focus on themes of escape, the perpetual search for peace, and navigating a life being pulled in multiple directions at once. There are also simple meditations on driving through a city, and the weather. McKenzie was inspired by the path icons like Newman and Nilsson had paved, where a silly or playful number could be sandwiched directly between a song about heartbreak or an earnest redemption and a scathing satire or character commentary. He threw a bit of everything into the mix, recording ideas on his phone at home in New Zealand after the kids had gone to sleep. Back in LA, he fine-tuned the songs with his longtime producer and collaborator, Mickey Petralia, and longtime film collaborator Chris Caswell created charts for that same ensemble of session players with whom they’d recorded so many pieces for film. The majority of songs were then recorded at United Studio in Los Angeles in just a few takes.

While the album may be free of traditional punch lines, it doesn’t lack a sense of humor. It showcases a new stage of McKenzie’s career, to be sure, but one that isn’t so far removed from his past work and true artistic self. Like Jim Henson before him, who made a career of blending the silly with the sincere and the playful with the profound, McKenzie also aims to connect rainbows to the ridiculous.