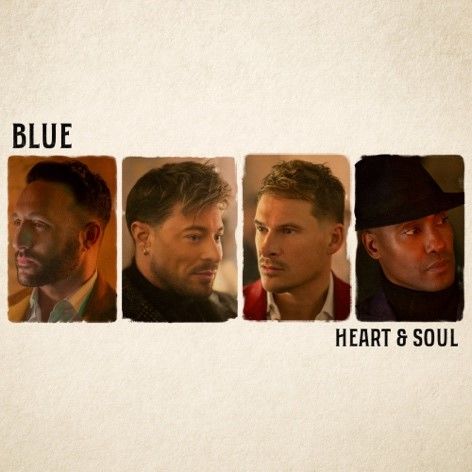 Blue, one of the UK’s most exciting and successful boy bands are back with a new album, Heart & Soul, their first new album in 7 years. The British four-piece, including all 4 original members - Antony Costa, Duncan James, Lee Ryan and Simon Webbe - have been back together in the studio working on one of their best records yet that both nods to the past while pushing things forward.

Blue have sold over 16 million albums worldwide including 3.6 million albums and 1.4 million singles in the UK. Their first 3 albums, All Rise, One Love and Guilty all topped the Official Album Chart and the group have worked with a variety of legends including Stevie Wonder, Elton John and Lil’ Kim. They recently announced a headline UK arena tour in December 2022 celebrating the new album and 20th Anniversary of their 4x platinum album All Rise, the 11 date tour includes a their first headline show at the iconic London venue The O2.

Blue, AKA Antony Costa, Duncan James, Lee Ryan, and Simon Webbe, were one of the biggest and best boybands in an era bursting with them. Across three, multi-platinum chart-topping noughties albums, that showcased their mix of silky R&B, immaculate pop nous and pristine ballads, Blue – who formed in 2000 – shifted 16 million records worldwide, scooped two Brit awards and claimed 11 UK top hits, including three number ones, and now after 7 years, they are back with a new album that both nods to the past while pushing things forward.

For their sixth album Heart & Soul, the band were keen to give everything to make a record they are proud of. Their legacy is there with a mix of carefree, party-ready tracks, heartfelt ballads that showcases the band's top tier vocals and instantly classic-sounding bangers.

For this record the band worked with the man that signed them, industry legend and A&R miracle maker Hugh Goldsmith, and wrote with MNEK, song-writing and production team Dsign Music and producer Paul Visser, as well as covering a favourite from back in the day in the shape of 112's flirtatious 2001 R&B classic, Dance With Me.

So much of what makes Heart & Soul work is its through line from the past to the present. From classic Blue ballad to moments that sees them experiment with rockier textures. The linking element is always those four voices and an inherent awareness of what makes Blue tick. For the band, this is the first album in a while that has captured that early spirit so effortlessly and they're rightfully confident about it.