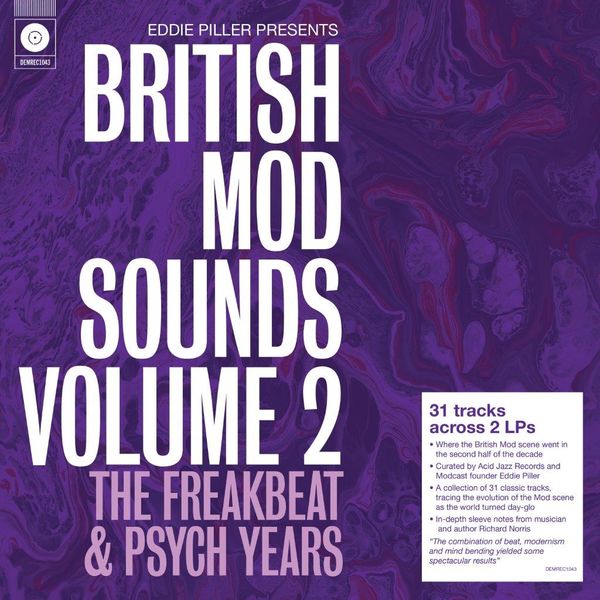 Curated by Acid Jazz Records and Modcast founder Eddie Piller, “British Mod Sounds of The 1960s Volume 2: The Freakbeat & Psych Years” is the follow up to the hugely successful “British Mod Sounds of The 1960s”, featuring 95 original tracks across a 4CD set a deep dive into the post Mod scene in '60s Britain. Featuring a selection of classic and rare tracks, tracing the scene from early '65 to the dawn of a new decade.

Even before Demon's well received 2022 box set 'British Mod Sounds of The 1960s' was released conversations were being had around a follow up, though rather than just offering a straight if slightly diluted second volume, compiler Eddie Piller decided to put together a collection exploring "What the Mods did next". Once again, long conversations (and the occasional heated debate) were had to ensure the quality of music and attention to detail were second to none. Anything less just wouldn't be the Mod way.

The British Mod bands that had made the first half of the decade so exciting were still around but inevitably their influences had changed. No longer content with re hashing American R&B, the scene split in multiple directions, not all of it forward looking some hardened their up tempo sound and gradually evolved into what we would come to know as Freakbeat. Others bought in psychedelic, esoteric or Eastern influences. A third strand explored a more pastoral or Folk based route. Simply put, songs and hair got longer.

Before the decade was out the choices for the discerning listener included Jazz Rock, Proto Prog, Whimsy, Heavy Rock, and Psychedelic Soul even sounds derived from Cockney music hall made an appearance.

'Volume 2: The Freakbeat & Psych Years' tracks the development of the original Mod mainstays (the Small Faces, The Who, The Action, The Kinks), with a generous selection of future superstars (David Bowie, Marc Bolan, Fleetwood Mac, Jimmy Page of Led Zeppelin and Steve Howe of Yes are all represented here), alongside a few artists so obscure, so rare, that they never got to release a record in the '60s, but Eddie has tracked down the tapes nonetheless.

Stylishly packaged (of course) and including a new sleeve note by Richard Norris, author, musician, producer and DJ, who worked at pioneering psychedelic reissue label Bam Caruso in the '80s, produced Joe Strummer's Mescaleros , but is perhaps best known as one half of Techno duo The Grid and the critically acclaimed group Beyond The Wizard's Sleeve.