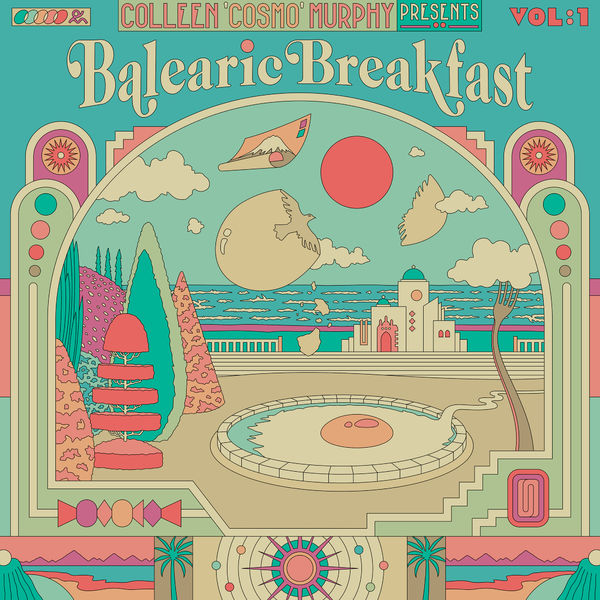 Colleen ‘Cosmo’ Murphy presents Balearic Breakfast Volume 1. An eleven track compilation of gloriously transcendent genre-hopping music inspired by one of the most listened to shows on Worldwide FM; most tracks impossible to find on vinyl.

How does one make a Balearic Breakfast?

You need to obviously start with one part blissful sunshine, rising over one part white sand, set to the sound of the sea looping back and forth. But what else - that perfect, idyllic backdrop aside - sums up that most important time of the day, specifically when spent right in the heart of the most glorious archipelago in the western hemisphere?

Colleen has been mixing together Balearic Breakfast shows on Worldwide FM for the last few years after starting in earnest during the first pandemic lockdown. Her shows offer a remedy to the pressures of the outside world; each is curated with the admirable aim of trying to “create a musical atmosphere for escape”, be it from bad weather or bad vibes.

Inspired by formative experiences at The Loft in NYC and on the terrace at Space, Colleen’s Balearic Breakfasts are endlessly eclectic and always inspiring, pulling together - in her words - a “hodge-podge of chill out, spiritual jazz, deep soul, percussive house, quirky disco, indie-dance and what may ‘traditionally’ be called ‘balearic’ (whatever that may be).” Basically, the kind of music you want to hear as the sun breaks over the horizon.

For her first Balearic Breakfast album (lovingly compiled for the ever-visionary Heavenly Recordings), Colleen has put together a set of songs that allow the listener to drift with her between myriad genres and join the unseen dots between them. The journey takes in shooting star ambient sounds, deep soulful hypno-house, ecstatic Neu-esque locked grooves, etherial sea-shore jazz and Southern Hemisphere starlight disco, with tracks by artists such as Friendly Fires, Mildlife, Linkwood and Lady Blackbird (a track praised by Elton John, who called it “a groove that blows my mind”) and producers such as Andrew Weatherall (under his Asphodells alias), Ashley Beedle, Coyote, the late, great Phil Asher and Cosmo herself.

Flowing together, the tracks perfectly create that musical atmosphere for escape - a recipe for daydreaming yourself into a Balearic Breakfast state of mind. Tune in and leave the everyday behind. The sun’s rising overhead and the waves are at your feet, whatever time of day it is wherever you might be in the world.