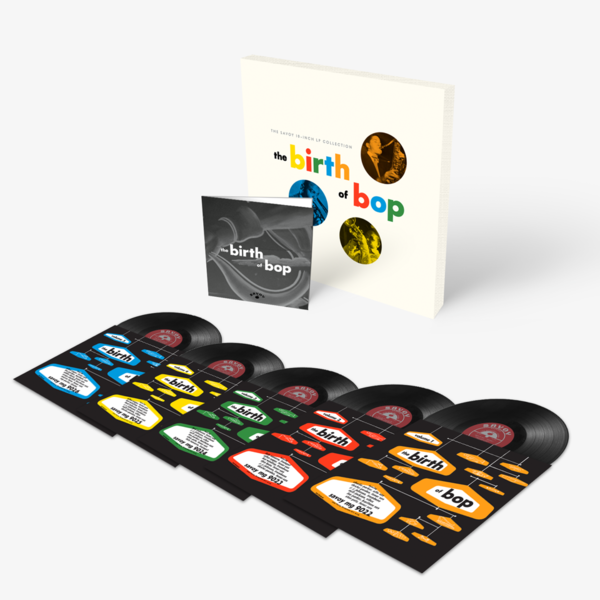 The Birth of Bop: The Savoy 10-Inch LP Collection [50 Copies Available Only]

Looking through the personnel that fill the discs on Birth of Bop and seeing how many of them belong on the short list of those who brought bop into the world, it truly reveals the vitality and prescience of the Savoy artist roster.

When bop began in the 1940’s, big-band swing music still held sway. The young players fostering this new music constituted a relatively small cadre within the jazz world, and as a result, members of the new guard often worked together in groups under each other’s names; after all, they didn’t yet have a huge pool of players from which to draw. And the companies willing to take a chance on bop were correspondingly sparse – at least at first – in part because most big labels hadn’t seen this coming.

Thus, the handful of small labels interested in bop became beacons for the people creating it. Savoy, founded in late 1942, helped lead the way. And for that, you can thank Teddy Reig, who cut a massive figure in the early days of bop record-making. A born hustler and a dedicated music fan, Reig had ingratiated himself with the jazz artists he admired and befriended many of them. He hung out in the clubs and scouted younger players on the ascent (including Charlie Parker and Dizzy Gillespie), taking note of their obvious talent. When he decided to enter the record business, his first production (in 1945) featured these bop torchbearers, whom Reig hired as part of a band led by Clyde Hart that included the blues-based singer Rubberlegs Williams. It was also the first studio date shared by Gillespie and Parker.

Including extensive liner notes on the history of bop and Savoy’s role in that, by GRAMMY®-winning writer and broadcaster Neil Tesser, along with an overview of each track, this set acts as both an introduction and education on the origins of Bop. Audio is mastered by Joe Tarantino at Joe Tarantino Mastering with cuts by legendary artists including Charlie Parker, Dexter Gordon, Stan Getz, Milt Jackson, Allen Eager, Eddie “Lockjaw” Davis and more.