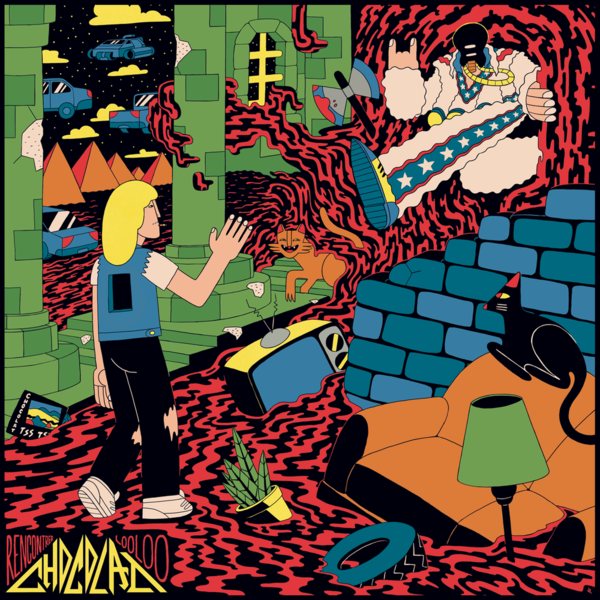 Product code
LPBBIB033
Format
Vinyl LP
Label
Beyond Beyond Is Beyond

Rencontrer Looloo, Chocolat's second album after an extended hiatus, finds the band swimming through modal waters, somewhere at the confluence of hard jazz and surf metal, blended with a songwriting tradition that the media, for lack of a better term, often define as folk.

A far stretch from the psychedelic kraut explorations of Tss Tss, the new opus is a sort of initiatory account of the band’s journey into orbit. Here Chocolat's kaleidoscopic visions of space have been replaced by manifestations of stark, shiny white boulders, with edges sharper than a wild jackal’s fangs. First came a band bursting with unpredictable rock and roll violence in the middle of the new millennium’s first decade. Chocolat charmed critics with its Dylan-inspired French chansons, whose sophisticated arrangements didn’t completely cover up the band’s penchant for gritty garage tones.

Shortly after all this infectious madness, some strange force of nature brought the members of Chocolat back together. Rencontrer Looloo, which is probably the last release ever recorded at the now defunct Studio Victor, was produced by Emmanuel Ethier, written by Jimmy Hunt, mixed by Christophe Lamarche-Ledoux, and recorded by François-Régis Pagé and Louis-Philippe Kyer. The album features (in alphabetical order) Emmanuel Ethier on guitar, Brian Hildebrand on drums, Jimmy Hunt on guitar and vocals, Christophe Lamarche-Ledoux on keyboards and saxophone, and Ysaël Pépin on bass. To get a taste of the future, simply follow the three neon red nipples that light the night sky with all their electroluminescent splendor. Once you get there, savour the sweet nectar Chocolat pours you, straight from Looloo's flaccid and wrinkled breasts. Drink, and drink some more.