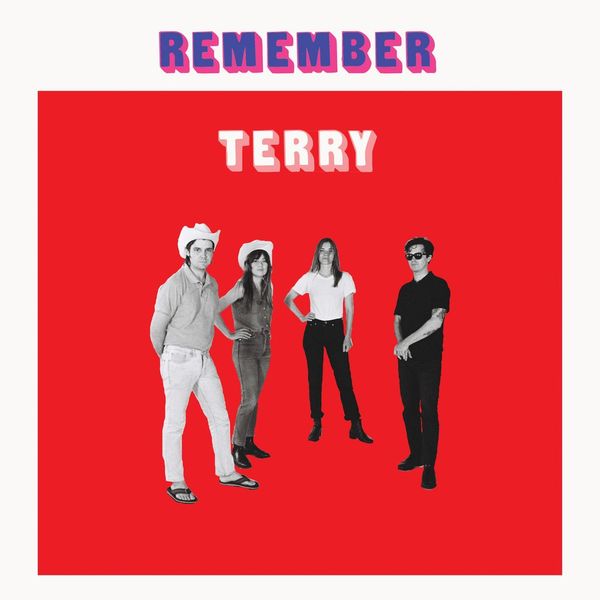 Terry is a latent man of mystery. Terry is also a band from Melbourne, Australia. Divide him in half and you split the genders, into quarters and you get Amy Hill (also of Constant Mongrel, School Of Radiant Living), Xanthe Waite (Mick Harvey Band, Primo), Zephyr Pavey (Eastlink, Total Control, Russell St Bombings) and Al Montfort (UV Race, Dick Diver, Total Control). Guitars, bass, drums, all four sing. Terry are busy people and Terry is a particularly active project too, having released two EPs and a full length album (‘Terry HQ’) last year on Upset The Rhythm.

After returning from summer 2016’s European tour, Terry set about writing a new album of songs. These are now grouped together as ‘Remember Terry’, an album full of wish fulfilment, critiqued characters, memorial muscle and historical hustle.’Start The Tape’ is a not quite two-minute careen through what Terry are best known for; gang vocals, chased-down melodies and acerbic commentary. “The Boys in Blue are no nonsense, but no nonsense just won’t hold up” they assert throughout the song, amid unbridled drum rolls and keyboard sirens.

Terry draw on their everyday realities to make personal conclusions; “I can’t live here, I can’t leave here” they collectively sing through the strummed guitars and skittling synths of ‘Heavin Heavies’. Somehow the serious nature of the themes handled in their songs are only further emphasised by the tuneful, arguably ‘sing-along’ treatment Terry usually employ. ‘Give Up The Crown’, ‘The Colonel’ and ‘Gun’ are other prime examples of this, packed full of assembled vocal harmonies, contagious riffs and rhetoric.

‘Remember Terry’ is a fitting follow-up to last year’s celebrated debut album. Ideas are pursued and new ground explored. Throughout this expansion of sound and subject-matter though, Terry remain committed to telling it straight, reporting from the frontline of the political made personal. ’Remember Terry ‘ was recorded by Terry at Grace Lane and Terry HQ through the first few months of 2017. Digitised by Nick Kuceli. Mixed and Mastered by Mikey Young.