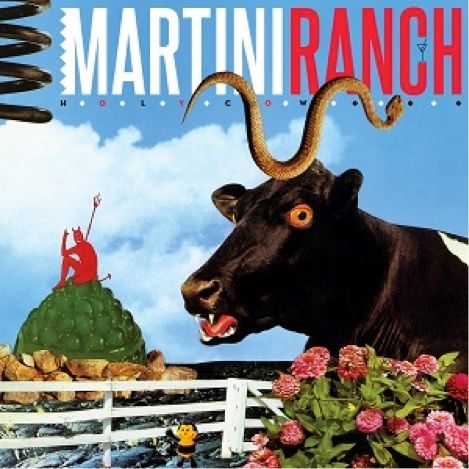 Holy Cow...perhaps the greatest avant new wave pop album you’ve never heard of, until now! courtesy of this re-issue via FUTURISMO. MARTINI RANCH were a project made up of the cult Hollywood actor BILL PAXTON (Near Dark, Weird Science, Aliens) who sadly passed away recently, and the multi-talented musician Andrew Todd, who between 1986-1988 carved out this bizarre yet pop synth laden venture that not only encapsulated their own unique musical and visual talents, but also those of their peers. Along for the ride on Holy Cow (the bands only ever LP) are Mark Mothersbaugh, Bob Casale and Alan Myers of the seminal DEVO, Cindy Wilson from THE B-52’s on vocal duties and perhaps even more intriguing is the appearance of follow actors Judge Reinhold (Beverly Hills Cop) and Bud Cort in the proceedings.

But the madness doesn’t stop there, oh no! As witnessed on the DVD - included alongside the vinyl on FUTURISMOs’ redux version of Holy Cow - visual duties were in the hands of Hollywood luminary James Cameron (The Terminator, Aliens) who directed an epic neo-western video for ‘Reach’. Featuring faces from the era including fellow director Kathryn Bigelow (Point Break, Near Dark) and Aliens/Terminator alumni Lance Henriksen, Paul Reiser and Jenette Goldstein. Dust, motorcycles, female bodybuilders and sci-fi leanings, and as large in scale as you would expect.

A second video, this time for ‘How Can The Labouring Man Find Time For Self-Culture’ was directed by photographer Rocky Schenck, trading the wild west for the dystopia of Fritz Lang’s Metropolis and German Expressionism, once again with friends and acquaintances in tow including Paxtons’ Weird Science co-star Anthony Michael Hall and Aliens co-star Michael Biehn.

MARTINI RANCH were maybe an indictment of the time, yet it’s undeniable the talents of Todd and Paxton do in fact make for one hell of an interesting pop group. For fans of DEVO and 80’s cinema in general this record is a must!