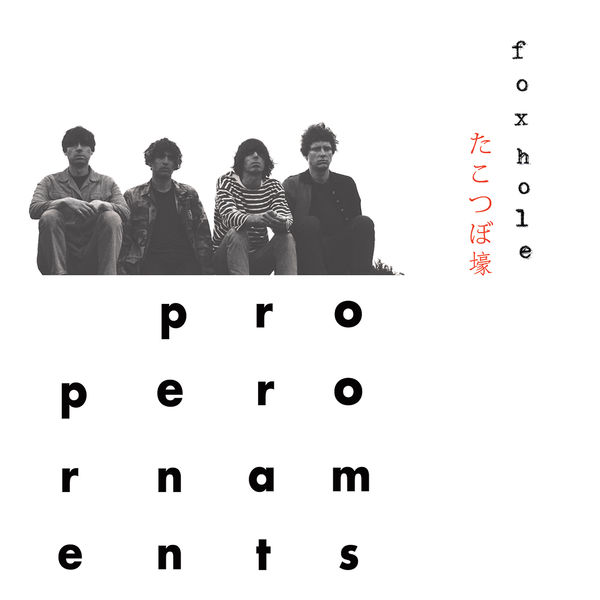 The Velvet Underground, Elliott Smith, Veronica Falls, The Bats, Ultimate Painting, Toy. Proper Ornaments is the project of James Hoare (Ultimate Painting, Veronica Falls) and Max Oscarnold (Toy, Pink Flames). Debut LP ‘Wooden Head’ (FortunaPop 2014) perfected the unique slant of their previous work. James and Max started out writing the follow-up in January 2015. On ‘Foxhole’ they’ve sliced away a whole stratum of their sound, removing some distortion and lowering the frequency of plectrum strokes to allow more nuanced, piano-led ideas to emerge. The title isn’t a reference to Television’s jaunty proto-punk record but seems to be more of a dark, protective interior, a head space sketched out on ‘Jeremy’s Song’. While their particularly recognisable production style (a bright, frozen counterpoint to the airless mixes one encounters more often) remains, three things stand out as likely reasons for the shift in mood. By the time they got around to recording again in James’ bedroom in Finsbury Park that Summer, the instability around the recording of ‘Wooden Head’ (and the five years before) had slid into a deep and seething acrimony. Second, they both bought pianos. Third, when the band, with Daniel Nellis and Bobby Syme joining on bass and drums went to record at Tin Room in Hackney in June, the pinch wheel on the 8 track machine was broken and somehow no one noticed. All but one recording, ‘The Frozen Stare,’ was hopelessly warped, so they went and did it all again from scratch back at James’. “We ended up doing the whole thing there as the atmosphere suited the direction of the foxhole and we were more comfortable working on it in our own time,” says James. That’s why the record has a laid back, conversational, not imposing or anxious feel in my opinion. If ‘Always There’ was the most melodically fluid but dimly lit point of the first record, there are another half album of songs here at least that are as strikingly gorgeous and unsettling. ‘Memories,’ ‘Just a Dream,’ ‘The Frozen Stare’ and ‘When We Were Young’ are in this mould, as is the icy, slightly devastated goodbye that closes the record ‘The Devils,’ filled out with piano reminiscent of Big Star’s ‘Third’ or Lou Reed’s ‘Berlin’ and cracked double bass. What was in evidence in two of their earliest songs - ‘You Still’ and ‘Are You Going Blind?’ – an understated, poetic play of moral sensitivity against a callous distance, of warmth and hostility, has reached its most sustained expression yet and gives their pop moments of a haunted love song quality along the lines of Del Shannon, Lesley Gore or Roy Orbison. ‘Bridge by a Tunnel’ and ’I Know You Know’, on the other hand, share in the breezily abstracted character of 2014 single ‘Magazine,’ the later laying a sardonic (non)apology - ‘I know you know, things could’ve been different/but they’re not’ over careful daubs of slide guitar. ‘Cremated’ is also guitar-lead, and reaches an early apogee of morbid oblivion baiting, while ‘1969’ is a really perfectly recorded grand sweep of sound that recalls Serge Gainsbourg and ‘Harvest’-era Neil Young. Proper Ornaments hold the attraction of seeming to not try very hard at all and achieve something outstanding nonetheless.