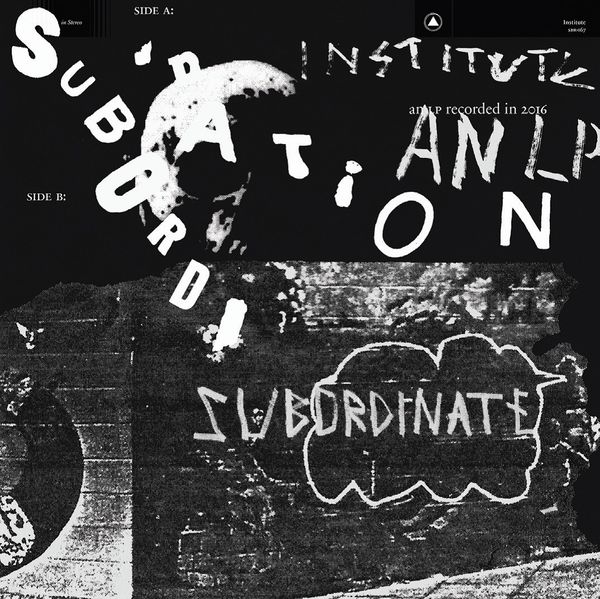 On the surface a straight up hardcore album but there’s a glam stomp, some speeding krautrock grooves and even time for some dangerous all-out rock riffs. A visceral but immediate listen – GET IT!

Since their first demo in 2013, the Austin expats in Institute have edged their raw anarcho punk blitz into something much more expansive and nuanced. 2014’s Salt EP marked the beginning of the band’s working relationship with Sacred Bones, and it explored longer, more experimental song forms. Catharsis, the band’s debut full-length, was another huge push forward, with a slightly cleaner production and some Krautrock influence creeping in around the edges. Subordi¬nation sees them push themselves further out of genre, incorporating hard rock and glam and writing some of the most diverse material of their career.

Subordination was written in the days leading up to Institute’s first European tour, where they then had a chance to sculpt the songs live before recording them in summer of 2016. The song writing and recording process sought to close the gap between the band’s records and shows, to make an album as representative of their live set as possible. It was the most collaborative Institute writing session to date, with all four band members contributing (gtr -Arak Avakian, drums - Barry Elkanick, bass- Adam Cahoon & vox - Moses Brown). They worked again with producer Ben Greenberg (Uniform) and fully captured the intensity that has made them one of the best live punk bands touring today.

Frontman Moses Brown’s lyrics remain deeply personal, but rather than diving into introspection and plucking out intimate details about his life, he attempts to dismantle systems of patriarchal thought and power. Brown investigates national insecurities and American socialization failures through the lens of his personal experiences in both public school and art schools.

The songs on Subordination address the lonely sham of playing by the rules, the search for money and power, the annihilation of a true personality, and the stan¬dards of normalcy that from childhood conditions us to feel abject.