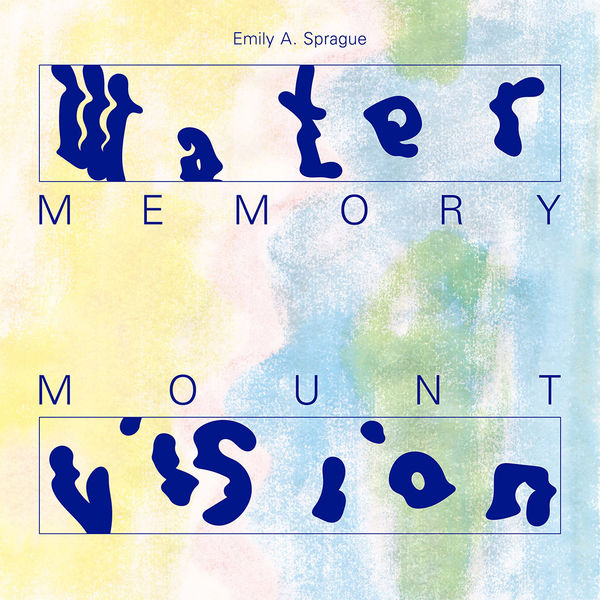 Emily A. Sprague’s Water Memory and Mount Vision albums are presented in new and complete detail. Emily’s work concerns the connectedness of all things, giving living, core form to the mysterious forces that guide earthly activity and human contact with them. Memory and vision, ocean and mountains, question and answer, emotions and infinity. Sunshine, lizard, sea salt.

Through sound and poetry, Emily focuses on fleeting moments of crystalline clarity and meditates on expanded lifetimes of intricate meaning-making. This vision is unfalteringly beautiful, gently profound. But, as Ursula K. Le Guin intuits in her translation of the Tao Te Ching, “In poetry, beauty is no ornament; it is the meaning. It is the truth.”

A collection of reflections are visible in the mirrored structures of Water Memory and Mount Vision, two chapters - two halves - each complemented by a written verse. As much about the presence in youthful experimentation as the permanence of transition and maturation, Water Memory is the first long-form instrumental music Emily ever channeled, generated over a year of self and sonic exploration between Massachusetts and New York.

Water Memory unfolds like a collection of ancient affirmations; at times playful, even illusive, but always glittering and real. The meaning, like the sight, is aqueous - never too solid, nonetheless substantial. Each verse is intentionally titled: “A Lake” is perhaps an exclamation (‘look - a lake!’), an invitation to break its cool glass surface into ripples with your body, float on its skin, observe the inhabitants of its province - birds circling, insects chirping, its own patch of sky just being blue, endlessly. It is nameless, unpossessed, and contained.

“Water Memory 1” is woven from cyclical, melodic phrases riding on wistful tides. “Water Memory 2” is its expanded twin, combining coastal sound with a free-flowing, synthesized drone and simple, improvisatory held notes seemingly resonating from behind a falling water facade. “Dock” is a liminal space between water and earth, human structure decaying into nature, singing with an alto, organelle voice. And “Your Pond,” is childlike minutiae looped sweetly, a gift now belonging.

By contrast, Mount Vision was conceived in a smaller window of time than its predecessor, the pure residue of intense emotional build up during a period of self-healing and unguarded reflection. Composed and captured in Northern California, the body of Mount Vision is a trio of synthesizer pieces; deeply grounded compositions of extended tones trilling into the ether.

Between them is a “Piano” pair, two pieces which loop portions of a lilted phrase augmented by, in “Piano 1,” almost invisible, synthesized strands, and in “Piano 2,” field recordings of birds. “Huckleberry” is the most textured of entry in this compendium, embodying flickering activity of miniscule worlds, a vivid description of environment.

Though undeniably the product of potent emotional experience, Mount Vision is a vision of newness, of soul convalescence. It leaves off where its poetic complement ends, “next time.” Not so much an utterance of regret, but the invocation of a new phase, always with respect to the last, a pattern that eternally visits. Emily’s mission on this planet may be facilitating - or illuminating - the correspondence between innermost knowledge and intelligent nature, and Water Memory / Mount Vision are most certainly monumental documents along this sharing path.