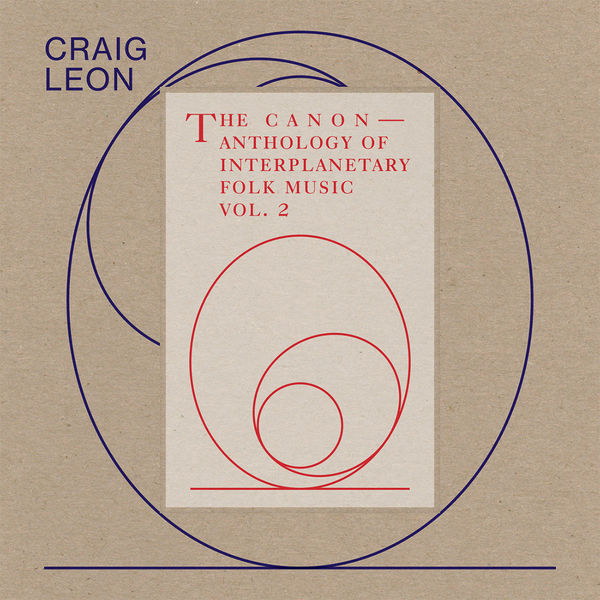 Craig Leon revisits the extraterrestrial origins of civilization on Anthology of Interplanetary Folk Music Vol. 2: The Canon, a continuing chronicle of his early 80s albums Nommos and Visiting. Exploring the cosmic lore of Leon’s earlier work, The Canon expands upon the conceptual cycle based on the alien and mathematical relationships that backbone the creation of art, architecture, science, and music.

In 1981, producer and composer Craig Leon, known in the downtown New York zeitgeist for his production on The Ramones and Suicide’s debut albums, released Nommos, a minimal, primitive electronic exploration based on a speculative, wildly imaginative anthropology.

After viewing an exhibition of Dogon art at the Brooklyn Museum in 1973, Leon remained fascinated by the Mali tribe’s creation myth that the Earth was visited in ancient times by the Nommos, a semi-amphibious alien race who travelled from the white dwarf Sirius B to impart their wisdom to mankind.

Nommos, curiously released on John Fahey’s Takoma Records, manifested Leon’s obsession and investigation: an abstract, ascendent collection of music that could have soundtracked the interstellar visitors’ journey to Earth. Shimmering, mechanical, and anchored by an entrancing pulse of the Dogon’s ceremonial music, Nommos and its sequel, the privately pressed 1982 album Visiting, careened into obscurity.

In the intervening years, while Leon pursued his career as a successful producer, cult interest in the albums grew, culminating in the Anthology of Interplanetary Folk Music Vol. 1., the 2014 archival collection which presented Nommos and Visiting as they were intended to be heard, two sides of the same coin.

The Canon picks up where Nommos and Visiting left off, tracing the path of ancient wisdom imparted by the Dogon’s alien visitors spreading from Mali into Egypt and across the water to Greece as imagined in William Stirling’s ""The Canon,"" an anonymous exposition of cosmic law published in a nearly invisible print edition in 1897.

Though the music – propulsive and spacious – is clearly of a part with Nommos and Visiting, the alien sounds of the Nommos become more familiar to western ears and musical vocabulary as the album narrative thrusts forward. The Canon implies – through ecstatic, contemporary sound and synthesis – that the origins of Western thought, and civilization itself, lie in the great beyond.

Nearly four decades since their first collaboration on Nommos and Visiting, Leon is once again joined by his partner Cassell Webb on vocals and album production. Leon composed, and both he and Cassell performed, and produced all of the music of The Canon, consciously engaging many of the same synthesizers and programs of Anthology of Interplanetary Folk Music Vol. 1 for Vol. 2.

The duo are touring The Canon with an expanded ensemble throughout 2019 and 2020. Though Leon has performed Nommos and Visiting with orchestral accompaniment over the years, this will be the first time the live cast will also include instrumentalists steeped in the Dogon and Mediterranean musical traditions that infuse both volumes of Anthology of Interplanetary Folk Music