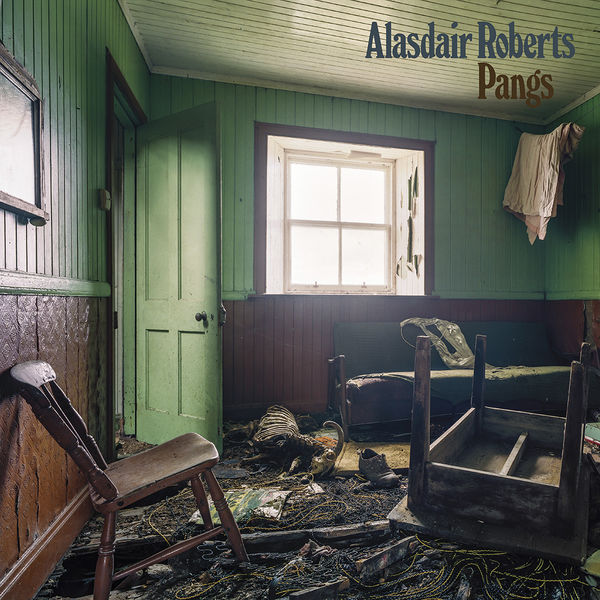 Since 2001, Alasdair Roberts has busily pursued the path of his ancestors, down the many and varied byways of Scottish traditional music - and of English and Irish traditional music as well, all of which have fed the American folk tradition from its earliest days. Over the past 15 years, Alasdair has released eight albums of self-written material and interpretations of traditional song alike, all played in a diversity of electric and acoustic arrangements, bringing a modern thrust to the music while honouring the many singers from whom this material was learned and adapted. Following the acoustic austerity of his self-titled 2015 release, Alasdair’s applied himself to electric guitar and band once again for his ninth album, ‘Pangs’.

Recorded in Ireland with Julie MacLarnon, ‘Pangs’ finds Alasdair in a power trio beside his long-time musical partners Alex Neilson on drums and Stevie Jones on bass (and he turns his hand to piano and organ too). Along with guests Debbie Armour, Tom Crossley, Rafe Fitzpatrick and Jessica Kerr, they summon up a powerful - and powerfully gorgeous - storm over ten new songs.

With ‘The Angry Laughing God’ and ‘The Downward Road’, Alasdair delivers two of his most driving pieces. Following that he turns around and plays two of his most touching ballads (and our lad’s had a lot of them over the years) in ‘Wormwood And Gall’ and ‘Scarce Of Fishing’. Additionally, the album is launched with the eponymous track ‘Pangs’ in what we hear to be a remarkable evocation of the 60s and 70s folk-rockers of the British Isles - the electric warriors of Fairport Convention, the Battlefield Band, Planxty, Richard Thompson and so many significant others.