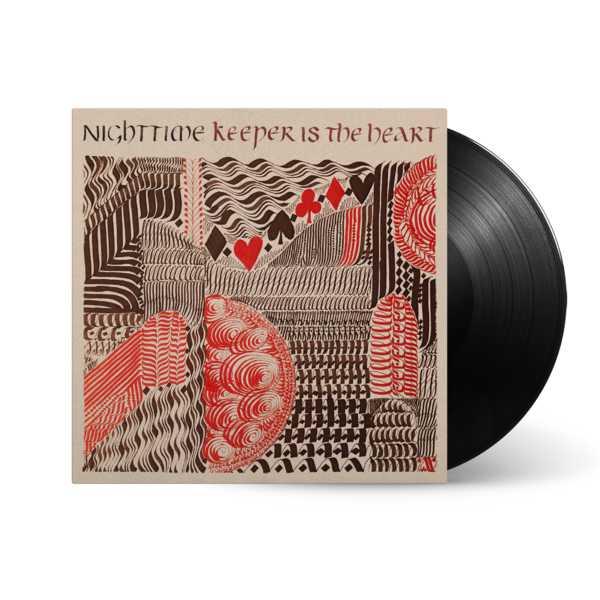 Eva Louise Goodman’s Nighttime project locates itself on a musical tree planted on the British Isles, perched atop the branch of folk leaning into sixties rock. Her upstate New York environs don’t stray far from that image. With tempered percussion, floating mellotron, and singing that evokes Bleecker and MacDougal on a fervent Saturday afternoon, her new album Keeper Is The Heart reaches deep into the essence of musicians such as Vashti Bunyan, Sibylle Baier and Pentangle, breaking down the decades into a sound thoroughly and bizarrely modern.

Through her years performing with Mutual Benefit, Goodman fell in love with life on the road and the collaborative energy of a band. In this third Nighttime album, she channels these experiences into her own music. The creative journey from writing to recording to mixing drove her deeper into a sense of self while expanding her sound. In the process, she put aside lo-fi origins and challenged herself to achieve the same intimacy with a bigger production.

Like most paths of self-discovery, the journey started with displacement. In October 2019, Goodman set out to record the album on her own, while cat-sitting at a friend’s empty Brooklyn apartment. Rather than recording, she was drawn to the overgrown garden, where she spent her days listening to music and reading old journals. Charlie Megira, The Incredible String Band and Roy Montgomery invoked the spirit of the album, as she realized that a new, more collaborative approach would be necessary to bring the songs to life.

In March 2021, after a pandemic year immersed in sound experimentation and writing, she entered the upstate New York studio of recording engineer Rick Spataro (Florist). Together, Spataro and Goodman dove into creating the album, recording one song a day, letting the spark and excitement of spontaneity be their guide. “I've always been fascinated with ‘automatic’ arts,” Goodman says, “where things are created intuitively and without premeditation, from the subconscious.” In this light, they worked with abandon–pushing through the heaviness of songs written years earlier with the same energy as songs which were not yet fully developed. Taking chances, improvising, they sought to strip away pretense, and elude perfectionism at all cost.

Among their experiments, the duo manipulated tape speeds–slowing or speeding up different instrument tracks, imbuing passages with altered perspectives. Improvisation was the key in track five, ‘The Way,’ a song about “the magical act of carving out a path through life, amidst all possibility.” After a long day of recording, the song was feeling heavy and uninspired. As night fell, Spataro picked up the Stratocaster and, in one take, laid down a rolling, roiling guitar line that defined the track.

This spirit of surrender weaves through the album. “Break free from time, and sink in the pool of the mind,” begins ‘Garden of Delight’, an energetic highlight, propelled by 60’s-era organ and Jefferson Airplane-esque vocals. The song was accidentally deleted after the first day of recording. By luck or fate, the one surviving file captured the song’s loose and free-wheeling essence. Inspired, Goodman encouraged her circle of collaborators to work similarly: “I gave everyone trust and total freedom to contribute as they felt called to, encouraging an intuitive approach of simply improvising, playing through the song a few times and then sending over the results.” Synth, cello, violin, saxophone and flute all appear, but often in unconventional ways.

Keeper Is the Heart reflects Goodman’s process towards greater creative freedom. The first words she sings: “Lift the veil of all of this hate/To see the fear at its base.” Her last lines: “We’ll follow the fates across the great expanse of time/To the source of the light within our mind.” In between is a work of art awash in personal awakenings that revel in the freedom of intuition, the lifting of veils, and the beauty of transformation. As Goodman states, “What is it you find when you look inward to see beyond, past your fears, to your heart's true desires?”