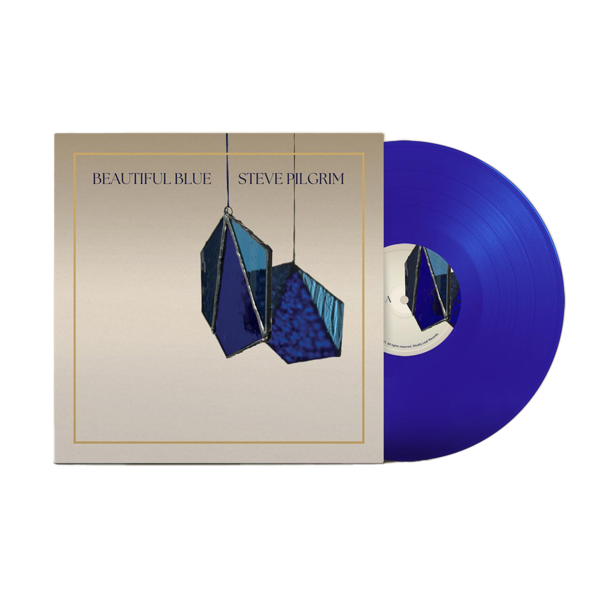 LP is limited to 1000 copies on Blue Transparent vinyl.

“Stevie, I’ve got this idea I thought might be good for you…”

Acclaimed songwriter Steve Pilgrim, who has played drums and sung with living legend Paul Weller for more than a decade, was in the middle of writing the songs of his life when a modern catalyst arrived. Pilgrim was reaching for humanity, humility and sanity in a fouled and confused pre-pandemic world of cultural unrest and rising extremism when the audio note landed (“Stevie, I’ve got this idea I thought might be good for you…”) and set the scene for Pilgrim’s progress.

“It was pre-pandemic, but still a time of political and cultural unrest in the UK: Brexit, austerity, the rise of extremism in various forms. It felt as a country we were being divided, pulled-apart… atomised. In the midst of this unrest and disquiet - as people, individuals, families, as humans - there was a sense of loss of direction and I felt it was important to break through to the other side with some semblance of positivity and hope. That’s how these songs started: to start making sense of becoming a functioning human in a dysfunctional country.”

That’s how they started, but it was the text from Weller that helped bring them together for critically-acclaimed songsmith Pilgrim. These sketches of songs, melodies and chord progressions became the beginning of a co-writing direction for Pilgrim/Weller and took the material to a new place, tugging and pushing the softly-spoken Scouser in new ways that only Weller could provoke. Tunes such as ‘Test of Faith’, ‘Don’t Let The Mirror Break You’, ‘One With All’, ‘Universe’ and ‘Where Our Love Goes’ have echoes of Pilgrim’s previous work, but add a warmth and classicism found in his co-writer’s celebrated ‘True Meanings’ record.

“By the time the pandemic arrived in 2020 the songs were ready and Paul suggested we start recording the album at his studio in Woking. With the assistance of house engineer and sonic wizard Charles Rees, within three days we had the bulk of the record done. We had ‘Beautiful Blue’ and everything was going to be ok.”

With the aural assistance of string arrangements from the renowned Hannah Peel, ‘Beautiful Blue’ is the work of an artist who finds strength in still life and shouts loudest when whispering. The songs on this album are streamlined, lacking fat and offer intricate acoustic guitar playing weaving in and out of memorable melodies (‘New Sky’), undulating strings (the gorgeous title track) and devastatingly delicate vocal harmonies (‘Everyday’).

“This set of songs took a while to complete as I wanted to impose thematic constraints on my writing. I knew it was important to stay focused and that’s when the message from Paul arrived. What an honour. The songs might now be written, but they couldn’t be realised without listeners… it would be great to see you at a gig.