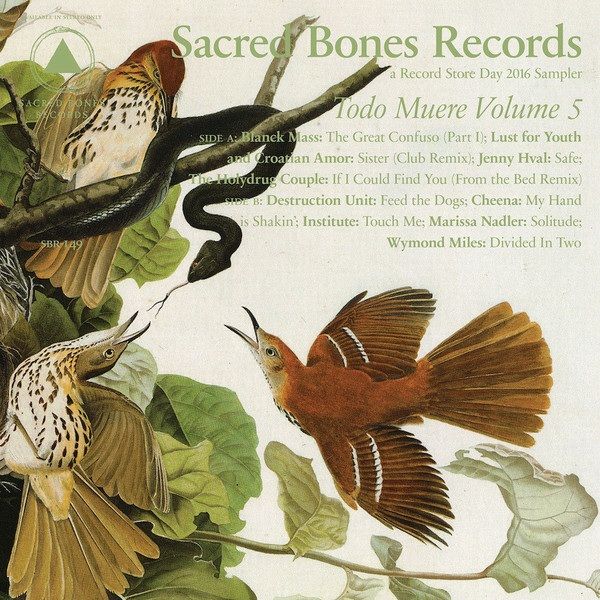 Sacred Bones returns with the fifth volume of its Record Store Day compilation series, Todo Muere. This year’s edition features a range of songs as eclectic as the label roster, from pitch-black dance floor cuts to mind-expanding psych-punk ragers to covers of both Black Sabbath and The Doors. Side A houses the four electronic-leaning tracks on the comp.

First up is the moody “The Great Confuso (Part I)” by Fuck Buttons member Benjamin John Power’s solo excursion Blanck Mass, taken from 2015’s digital EP of the same name. That’s followed by a club remix of the Lust for Youth/Croatian Amor collab track “Sister,” and a previously unreleased Jenny Hval track from her Apocalypse, girl sessions which has become a live staple, “Safe.” The appropriately hazy “If I Could Find You (From the Bed Remix)” by Chile’s The Holydrug Couple closes out the side. Side B takes the form of two suites — a loud, hard-charging punk trilogy from Destruction Unit, Cheena, and Institute, followed by two tracks in the folk-ish tradition by Marissa Nadler and Wymond Miles. The Destruction Unit song is an anthemic eight-minute strung-out bruiser from 2013’s Deep Trip sessions called “Feed the Dogs”. The NYC punk lifers in Cheena contribute the lo-fi slide guitar workout, “My Hand Is Shakin’” from their self-released demo tape, and Institute trades Ray Manzarek’s organ parts on The Doors’ classic “Touch Me” for an anarcho punk bass line. That’s followed by Marissa Nadler’s haunting, spectral version of Black Sabbath’s Master of Reality deep cut “Solitude” and Wymond Miles of The Fresh & Onlys’ great ’60s psych-folk interpretation, “Divided in Two,” from his forthcoming new solo LP due later this year.

As ever, Todo Muere showcases both the wide range and the unifying spirit of the Sacred Bones roster. It provides a satisfying primer on one of the most consistently vital labels in music today.