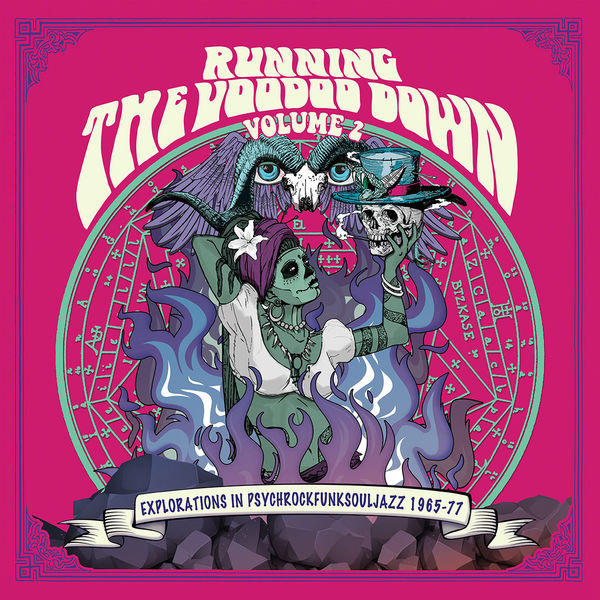 Running The Voodoo Down Vol.2 - Explorations In Psychrockfunksouljazz 1965-77

Running The Voodoo Down - Psychrockfunksouljazz 1965-77 is set to be released on TAD this November 9th. Carefully assembled by Dean Rudland and Tony Harlow the set looks at a decade when African-American music was exploring myriad new directions against a backdrop of incredible and explosive social change and features the likes of JOHN COLTRANE, MC5, SHUGGIE OTIS, SONNIE SHARROCK, DR. JOHN, ISAAC HAYES, JOE ZAWINUL and MELVIN VAN PEEBLES. Whilst not all of this music was commercially successful at the time, its importance and its influence on subsequent generations of artists – both black and white – has continued to grow over the years. A compilation for the heads, not a playlist.

As the blissed out 60s turned dark and political, music led the way and it became important to have a message to deliver whatever the medium.

Coltrane’s fierce energy revitalised jazz which was languishing in the doldrums of hard bop and organ trios, and inspired a new generation of politically active and motivated creators, but it also inspired a new generation of rock musicians who used his modal experiments as a launching pad for a spacier more underground music. The Byrds stuck within the “pop single” format but melded the energy of Coltrane’s “perfect” modal exploration My Favourite Things with their attempts to capture the mood of the Ravi Shankar pieces that had influenced Coltrane.” Eight Miles High combined the contemporary excitement of space travel with clear hidden references to the growing drug culture and captured lift off perfectly.

The music of a new generation of jazz players influenced deeply by the rock explorations of Eddie Hazel and Jimi Hendrix, and by the new afrocentric politics, but wanting to reach out in a voice their community could understand was another part of this. Alumni and friends of the various Miles Davis bands formed solo projects on every side, especially after the surprise success of Bitches Brew (it sold a million copies).

As music expanded its palatte so too did Black Art, Poetry and film. The brilliant recent exhibition Soul Of A Man [Tate London 2017] captured the explosion in politically motivated art led by creators like Emory Douglas. Isaac “Black Moses” Hayes was in the forefront as his starring role in Shaft pioneered the new genre of Blaxploitation.

But the genre was really started by less remembered Black entrepreneur Melvin Van Peebles. Van Peebles was a bohemian Renaissance man, who acted, wrote novels (in French) and poetry, and from the late 1960s made a series of low budget and self funded films.

Van Peebles poetic streak also spilt over into recordings – always heavily politicised and representative of the the new African American militancy. Van Peebles classic Brer Soul represents a milestone of the genre, whilst his album Serious as a Heart Attack shared its name with Val Wilmer’s awesome book on her life amongst the world of free and loft jazz and featured Van Peebles on the cover in a slogan shirt stating “Rated X by an All White Jury”. This was psychedelic music, liked by rock fans and the counterculture, but grounded deeply in jazz and constantly referencing the fact in its lyrics.