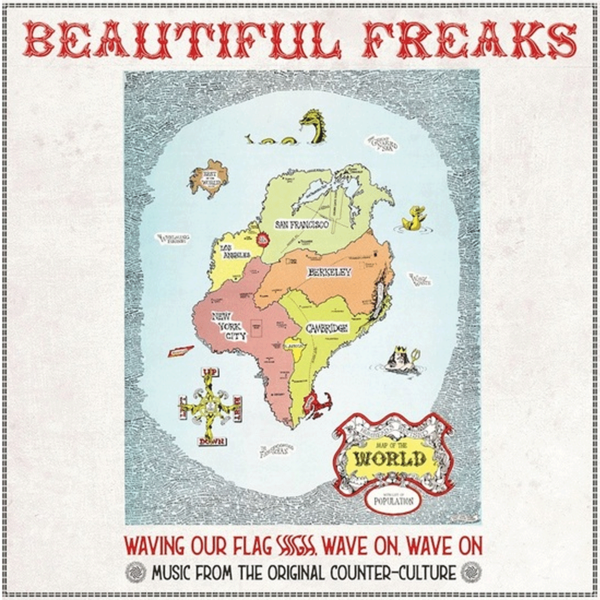 Beautiful Freaks - Waving Our Flag High, Wave On, Wave On: Music From The Original Counter Culture

BEAUTIFUL FREALS - WAVING OUR FLAG HIGH, WAVE ON, WAVE ON: Music From The Original Counter Culture is set to be released on TAD this August 30th. From the team that put together the acclaimed Running The Voodoo Down sets comes a carefully assembled celebration of the counter culture - from ALLEN GINSBERG and THE GRATEFUL DEAD to BRIGITTE FONTAINE, GONG and WITTHÜSTER & WESTRUPP.

A compilation for the heads, not a playlist.

“This is a journey … into Sound” …. ..…a different maverick sound one million light years from either the classic rock of the late 60s West Coast, the psychedelic pop of the UK, the primal shriek of the Vietnam soundtrack, or the wah wah powered protest of Blaxploitation. This is a journey into a new scene “THE ALTERNATIVE OF THE ALTERNATIVE”. This music is too abstract for the soldiers, and too square for the Panthers. This is a journey into the sound of the Freak Left and into an early DIY, powered by acid and humour, that is in many ways a true precursor of punk rock. It’s a journey into a cosmic mash up of folk, country, busking, comedy, music hall, raga percussion, chanting and the occasional spiked acid guitar solo. Music created communally and without commercial expectation over bottle after bottle of LSD laced soft drinks and free trips! But as much as it’s a journey into an alternative sound, it’s a journey into a different world .. the world of the Heads, the Freaks and Humbeads’ Map, a map created in a Berkeley coffee house and reworking the world to connect up the “Turned On” universe – a 5 boroughs type world dominated by a huge San Francisco & Berkeley and embracing New York, Cambridge, and LA and by implicit extension “hip” outposts in London, Paris, Berlin, Sydney and Sao Paulo.

Ten years after it had started the counterculture seemed almost done – washed away in a tide of punk rock nihilism, and economic hardship.

These artists represent something else, and something else important. Ideas of self made, of freedom and of protest through provocation live across these grooves. It’s time to give them a place in the pantheon and respect what they tried to achieve, because they did achieve change. The world we live in today is different and the Rainbow coalition is a valid and vibrant political force – it is the wave that gave us Obama and hope. And maybe the one that will bring further change in the future. “Sticking it to the man” was a state of mind and an ideal. Maybe we can give it a small voice again.