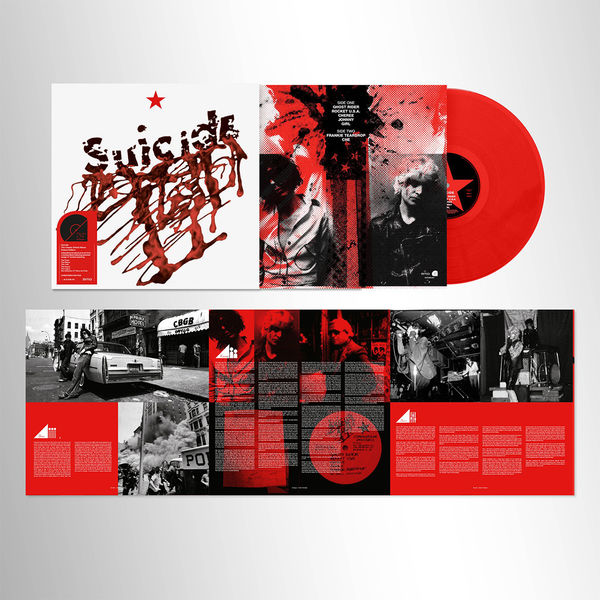 "“THE BAND THAT WILL ALWAYS SOUND LIKE THE FUTURE” - Dangerous Minds

Mute / BMG announce the definitive reissue of Suicide’s genuinely classic and highly influential eponymous debut album. As part of the Art Of The Album series, the album has been re-mastered in 2019 and re-issued on CD, Vinyl and for digital download.

The hardback CD and 140g red vinyl packages include exclusive photographs and extensive sleeve notes by The Quietus’ John Doran exploring the impact of the band through ‘The Times’, ‘The Key Players’, ‘The Song Writing’, ‘The Production’, ‘The Impact’ and ‘The Legacy’. Although the band barely received any credit at the time, Suicide (vocals: Alan Vega and electronics: Martin Rev) were inspirational for numerous synth pop bands throughout the 80’s.

Having originally formed in 1970, Suicide lay dormant for several years before they re-emerged in 1976 at the heart of the punk scene centered on CBGB's club in New York where the likes of The Ramones, Patti Smith and Television also found initial recognition. Four decades later, we are only just now counting the positive cost of their influence across genres such as techno, noise, electro clash, goth, synth pop, psych and industrial.

Suicide's influence was immediately seen in the rise of bands like Soft Cell, Depeche Mode and The Jesus And Mary Chain. Elsewhere they have had been praised widely by Nick Cave, Jim Thirlwell and M.I.A. and count Jason Pierce (Spacemen 3 / Spiritualized), Lydia Lunch, Bobby Gillespie, Nik Void of Factory Floor and Savages as fans.

The album was originally released in the UK in 1977 on the Red Star label run by Marty Thau (former manager of The New York Dolls).

Suicide was remastered for this release by Denis Blackham of Skye Mastering.