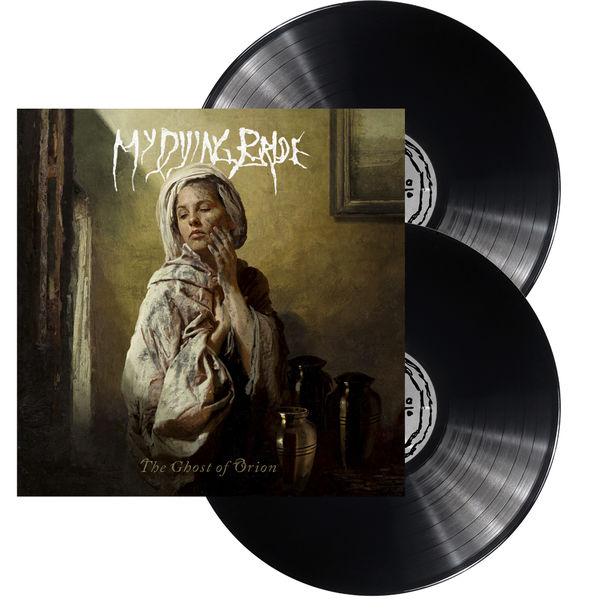 My Dying Bride’s three decades of misery almost came to an end several years ago. Following 2015’s universally lauded Feel the Misery album, vocalist Aaron Stainthorpe’s daughter, just five years old at the time, was diagnosed with cancer. Shocked and heartbroken, Stainthorpe put all band activities on hold while he, his immediate family, and My Dying Bride put their collective energies into eradicating what Stainthorpe called, “the cruellest of God's bitter and loveless creations.” The high hurdles, however, didn’t stop with cancer. In 2018, returning original member and guitarist Calvin Robertshaw texted his departure, effective immediately. No reason was given or explanation provided to anyone. Then, just as My Dying Bride had regrouped after positive news that his daughter was effectively cancer free, returning drummer Shaun Taylor-Steels departed right before the band were slated to enter Mark Mynett’s studio, Mynetaur Productions. Down two members but feeling right as rain, My Dying Bride moved on, mastered the doldrums, recording magnificent new album, The Ghost of Orion, to the joyful tears of fans across the globe, in the process. My Dying Bride formed in the dying summer of 1990 by Stainthorpe and guitarist Andrew Craighan. Across nearly 30 years, England’s most disconsolate export had not only extracted itself from the hardscrabble confines of their hometown of Halifax, but also turned into world-wide phenoms—nay, kings of doom-death!—their employment of violin, keyboards, Romantic era literary devices, and obsessively long songs serving as distinct identifiers. Albums Turn Loose the Swans (1993), The Angel and the Dark River (1995), Like Gods of the Sun (1996), 34.788%... Complete (1997), The Dreadful Hours (2001), and A Map of All Our Failures (2012) weren’t merely hour-plus long slabs of suffering but calendar moments, where desolation, sorrow, and all things blue (in dirge form) were passionately trumpeted and celebrated by fans absolutely devoted. My Dying Bride albums became life events for the low spirited and downhearted. Indeed, few bands in the ‘90s sounded like the Brits. Like Feel the Misery, My Dying Bride’s new album was written in isolation by Craighan. While the circumstances were similar—guitarist Hamish Hamilton Glencross left in 2014 and Roberts in 2018—the outcome of Craighan’s solo sessions turned into something very different. The guitarist had nobody off which to soundboard. Not a sideman. Not a bassist—four-stringer Lena Abé was on maternal leave. And certainly not his long-time writing partner in Stainthorpe, who was entirely ensconced in providing mental and physical reinforcements to his daughter’s cancer fight. Alone, Craighan unfurled a litany of killer songs in “Your Broken Shore,” “To Outlive the Gods,” “The Solace” (featuring Lindy-Fay Hella of Wardruna fame), and “The Old Earth.” The rest, as they say, is history. The title, The Ghost of Orion, has its origins in Stainthorpe’s lunatic-on-wine scribbling. Out of pages of prolix insanity and circuitous brilliance, the phrase A Ghost Crawls from the Mouth of Orion emerged. While the working title, But Once Black, had its place, it wasn’t fantastic enough. They wanted extravagance, mystery, and a title at least on par with The Thrash of Naked Limbs (1993) or A Line of Deathless Kings (2006). Stainthorpe and Craighan thought they had their album title in the obsessively long A Ghost Crawls from the Mouth of Orion. Both were smitten by the phrase’s filmic qualities, but were uncertain as to how it would unfold verbally. Conflicted about the voluble qualities of the title, they edited it down to the simple yet no less maudlin The Ghost of Orion. As for its meaning, Stainthorpe is naturally leaving it up to the reader/listener to read into and interpret. The departure of drummer Taylor-Steels on the eve of entering producer/engineer Mark Mynett’s Mynetaur Productions in Manchester should’ve put My Dying Bride on ice, but it didn’t. As luck would have it, ex-Paradise Lost drummer Jeff Singer, whose drums were already set up at Mynett’s studio, was available to pull the Yorkshirefolk out of their skins-less predicament. From December 2018 through August 2019, My Dying Bride, with Singer as the foundation, recorded The Ghost of Orion. At the helm, Mynett shepherded My Dying Bride through their first non-Mags [Rob Magoolagan] recording session since Paul ‘Hammy’ Halmshaw and Keith Appleton conspired to capture My Dying Bride debut, As the Flower Withers (1992). Mynett, who has a Ph.D. engineering, producing and mixing, was perfectly poised to be the new guy behind the board. Not only was he skilled and educated in the arts of sound, he was a super-fan of My Dying Bride. Indeed, the sessions for most of the band were routine, if not unexpectedly quick, but for Stainthorpe time in the vocal booth was torturous. Adversity, however, was overcome. From in-studio foibles to members departing to the life-changing aftereffects of dealing with a sick family member, the Brits rode it out. Replete with an excellent Eliran Kantor (Fleshgod Apocalypse, Ex Deo) cover art—commissioned by Stainthorpe—and sporting 11 tracks, The Ghost of Orion posits My Dying Bride back on the proverbial doom-death throne. In fact, they’ve never sounded better. From the doleful lay in “Your Broken Shore” and the deathly traditional “A Secret Kiss” to the introspective “To Outlive the Gods” and the grim 10-minute epic “The Old Earth,” The Ghost of Orion is the product of a vibrantly creative band unwilling to rest on their laurels or past glories.